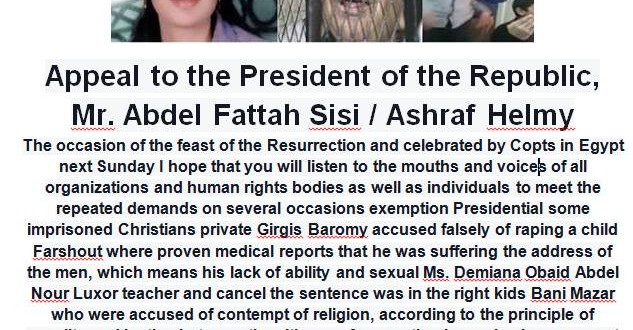 Appeal to the President of the Republic, Mr. Abdel Fattah Sisi 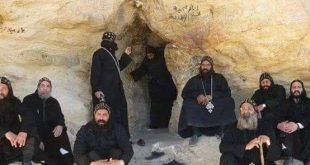 Ashraf Helmy
The occasion of the feast of the Resurrection and celebrated by Copts in Egypt next Sunday I hope that you will listen to the mouths and voices of all organizations and human rights bodies as well as individuals to meet the repeated demands on several occasions exemption Presidential some imprisoned Christians private Girgis Baromy accused falsely of raping a child Farshout where proven medical reports that he was suffering the address of the men, which means his lack of ability and sexual Ms. Demiana Obaid Abdel Nour Luxor teacher and cancel the sentence was in the right kids Bani Mazar who were accused of contempt of religion, according to the principle of equality and justice between the citizens of one nation have also been exempt from some Muslim prisoners in all their festivals and rituals or that there is nothing to prevent giving the President the right to exemption presidential Christians in their festivals recognized by the state.