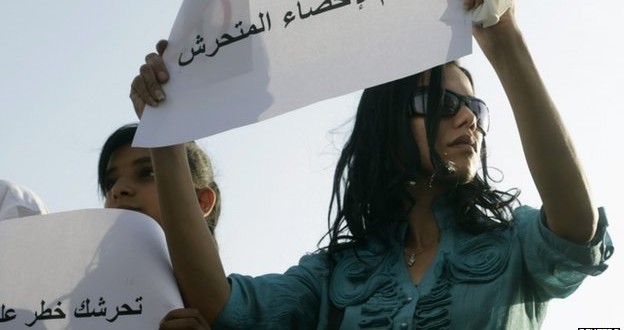 Egypt has asked YouTube to remove a video of a woman being sexually assaulted during a rally in Cairo’s Tahrir Square supporting the country’s newly elected president.

A spokesman for President Abdul Fattah al-Sisi said the request was made by the Egyptian embassy in Washington.

The woman asked for the video to be taken down when Mr Sisi visited her in hospital on Wednesday, he said.

YouTube has not yet responded to news of the request.

The graphic video, which apparently shows a woman being stripped naked and attacked in the capital’s Tahrir Square, went viral earlier this week.

A string of assaults during the recent celebrations have caused uproar.

State-run television showed the president personally apologising to a victim, whose identity has been kept anonymous, at a military hospital in Cairo on Wednesday.

Mr Sisi presented the woman with a bouquet of flowers

The woman was seen asking Mr Sisi to have the video of the attack removed from the video-sharing website.

“My daughter watches it every day and collapses,” she was quoted as saying by the Associated Press news agency.

On Tuesday, a presidential spokesman said Mr Sisi had ordered officials to enforce a new law making sexual assault a crime for the first time.

The law decrees that those found guilty of harassment in public or private will face up to five years in prison and a maximum fine of 50,000 Egyptian pounds ($6,990; £4,160).

Women’s rights groups have accused the authorities of failing to address the issue of sexual harassment.

A 2013 UN study said that nine out of 10 Egyptian women had experienced some form of sexual assault, ranging from minor harassment to rape.

Human rights campaigners have describe the extent of the problem in Egypt as “horrifying”.

Incidents have soared in the three years since the 2011 overthrow of Hosni Mubarak.