Obama to 'review options' on Iraq 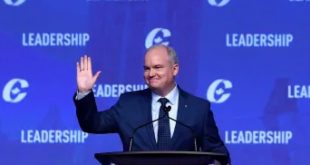 US President Barack Obama has said he will take several days to decide what action to take over Iraq, but that no US troops will be deployed there.

Any US involvement “has to be joined by a serious and sincere effort by Iraq’s leaders to set aside sectarian differences”, he said.

In recent days Sunni insurgents have seized the cities of Mosul and Tikrit, and are moving closer to Baghdad.

Iraq’s most senior Shia cleric has issued a call to arms to fellow Shias.

The message from Grand Ayatollah Ali al-Sistani, which was read out at Friday prayers in Karbala, said: “Citizens who are able to bear arms and fight terrorists, defending their country and their people and their holy places, should volunteer and join the security forces to achieve this holy purpose.”

There are reports that thousands have already joined Shia militias, which could play a crucial role in the defence of Baghdad, says the BBC’s Richard Galpin who is in the city.

The Sunni insurgents – from the Islamic State in Iraq and the Levant (ISIS) – regard Iraq’s Shia majority as “infidels”.

Mr Obama told reporters that ISIS represented a danger not just to Iraq and its people but that “it could pose a threat eventually to American interests as well”.

Barack Obama: “The US will do our part, but understand that ultimately it us up to the Iraqis as a sovereign nation to solve their problems.”

He said Iraq needed additional support to “break the momentum of extremist groups and bolster the capabilities of Iraqi security forces”.

Iranian President Hassan Rouhani called Mr Maliki on Thursday and promised that Shia-majority Iran would “not allow the supporters of terrorists to disrupt security and stability of Iraq through exporting terrorism to Iraq”.

How might US help Iraqi government? Frank Gardner reports

According to unnamed sources in both the the Wall Street Journal and CNN, Iran has already sent several elite units of its Revolutionary Guard to help Iraq, but other sources say Iranian officials have denied their involvement.

Amid the continuing uncertainty, the price of Brent crude spiked on Friday.

This was not the swift deployment of military force that some critics in Washington want. But it was a tough-minded, even impatient, statement of the president’s approach – as he put it at West Point: “Because we have the best hammer does not mean that every problem is a nail.”

He said American sacrifices had given Iraqis the chance to claim their future – but they, or their leaders. hadn’t seized it. He almost mocked the Iraqi army for running away, castigated the Government for not trying hard enough to overcome the sectarian divide and made it clear that the US would not be “dragged in” to a return to Iraq.

There’s a world view behind this statement that some Americans and others in the West may find uncomfortable – that US military might, as great as it is, cannot impose solutions on a complex world – behind his words the strong feeling that changing Iraq by force has already been given more than a chance. It failed. And it mustn’t be repeated.

Is Obama right over Iraq?

They plan to help the military keep ISIS out of Baghdad

The fighting has forced hundreds of thousands to flee their homes

Many have moved into the autonomous Kurdish region

Meanwhile, militants in Mosul have been celebrating their easy victory

After taking Mosul late Monday, and then Saddam Hussein’s hometown of Tikrit, the Sunni militants pressed south into the ethnically divided Diyala province.

Reinforcements from both the Iraqi army and Shia militias have arrived in the city of Samarra, where fighters loyal to ISIS are trying to enter from the north.

Mr Maliki is also reported to have travelled to the city for a security meeting.

In Geneva the UN human rights chief, Navi Pillay, has warned of “summary executions and extrajudicial killings” and said the number killed in recent days may be in the hundreds.

The International Organization for Migration estimates that 40,000 people have fled Tikrit and Samarra, adding to the 500,000 people who are already believed to have left Mosul.

Many who have fled have crossed into the autonomous Kurdish region.

The Kurdish leaders have used the current fighting to take control of territory they have sought to rule for decades, such as the strategic districts of Saadiyah and Jalawla.

Analysts fear that the violence will end in Iraq being further partitioned into Sunni, Shia and Kurdish zones.

The success of ISIS can only make the turmoil in the Middle East worse. ISIS is an ultra-extremist Sunni Muslim group.

Its success will deepen the sectarian conflict between Sunnis and Shias that is already the most dangerous fault line in the Middle East.

Iran, which is a majority Shia Muslim country, shares a border with Iraq. It has a direct line to Iraq’s Shia Muslim Prime Minister, Nouri Maliki, and close links with some Iraqi Shia militias. The Iranians could direct their proxies, and even their own special forces units, at ISIS.

That might end up further inflaming the anger of Iraqi Sunnis, who have already helped the advance of ISIS through Iraq.

What does Iraq’s crisis mean for oil?

An Islamist fighter near a burning Iraqi army Humvee in Tikrit

Are you in Saadiya, Jalawla or Baghdad? Have you been affected by the latest developments? You can email [email protected] using the title ‘Iraq’.