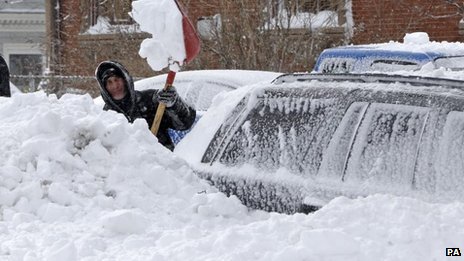 IMF cuts US growth forecast for 2014

The IMF said a “harsh winter” hit its 2014 growth forecast

The International Monetary Fund (IMF) has slashed its US growth forecast, urged policy makers to keep interest rates low and raise the minimum wage to strengthen its recovery.

The crisis lender said it expects 2% growth this year, down from its April forecast of 2.8%, after a “harsh winter” led to a weak first quarter.

It also said the US should increase its minimum wage to help address its 15% poverty rate.

“Given its current low level (compared both to US history and international standards), the minimum wage should be increased,” the IMF said in its annual assessment of the US economy.

The recovery from the great recession is a lot more advanced in the US than in many other developed economies. Even so, the IMF sees some important weaknesses. It calls for a catalogue of measures to boost what it calls the modest prospects for productivity growth. Job growth, it says has been healthy, but the labour market is weaker than is suggested by the headline numbers for people out of work. Long-term unemployment is high and many people are not even seeking work, which means they don’t register in the official jobless numbers. Wages are stagnant and poverty is stuck at more than 15%. Seven years on from the onset of the financial crisis, the scars on the wider US economy – never mind some European countries – have still not really healed.

It said a hike in the minimum wage would raise incomes for “millions of working poor” and help to create “a meaningful increase” in after-tax earnings for the nation’s poorest households.

The IMF said it only expected the economy to reach full employment by the end of 2017, with “muted” inflation pressures.

It said this meant interest rates could stay low for longer than the mid-2015 date, when a rise is expected by markets.

“Labor markets are weaker than is implied by the headline unemployment number,” the IMF said, saying long-term unemployment remained high and wages were stagnant.

“With better growth prospects, the US should see steady progress in job creation. However, headline unemployment is expected to decline only slowly,” it added.