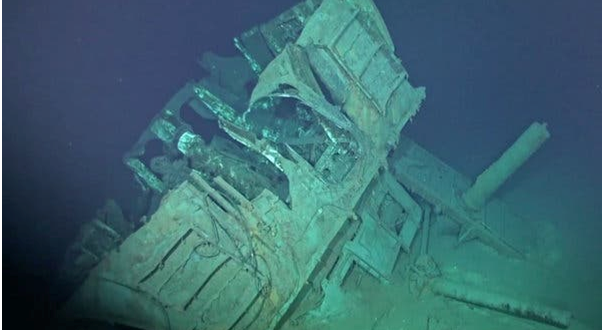 The Fletcher-class destroyer lost 186 members of its crew of 327 sailors, including its commander, Ernest E. Evans, who was the first Native American in the Navy to receive the Medal of Honor. It sank on Oct. 25, 1944

Navy historians confirmed that the wreckage belonged to a Fletcher-class destroyer, but said that they needed to do more research to determine if it was the U.S.S. Johnston or the U.S.S. Hoel DD-533, which sank on the same day.
Two five-inch gun mounts, two funnels, a propeller shaft and twisted hunks of metal are part of a debris field that was found in May by the Research Vessel Petrel in a trench 20,400 feet beneath the surface of the Philippine Sea.