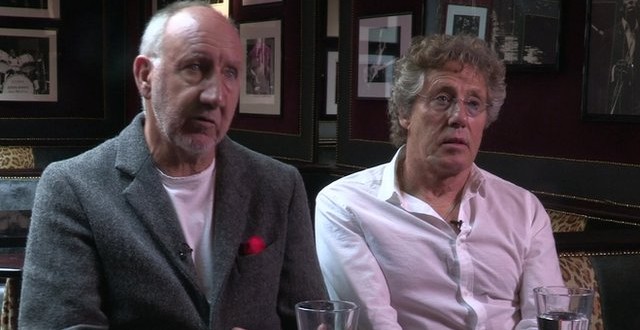 The Who announce 'long goodbye'

Is this the end for The Who?

The Who have announced that they are planning to record some new songs ahead of a 50th anniversary UK tour.

The rock group, whose hits include Substitute and My Generation, announced The Who Hits 50 tour would include songs from across their career.

“This is the beginning of the long goodbye,” said singer Roger Daltrey.

“We can’t go on touring forever… it could be open-ended, but it will have a finality to it.

“We’ll stop touring before we stop playing.” He admitted that touring was “incredibly tough on the body”.

We can’t go on touring forever… it could be opened ended, but it will have a finality to it”

Daltrey and guitarist Pete Townshend revealed the latest tour dates at a launch event at Ronnie Scott’s jazz club in London’s Soho, where they played a short acoustic set.

Arriving on stage carrying a Union Jack mug, Daltrey joked that he was adjusting his hearing aid before launching into Substitute – accompanied by Townshend on a 12-string guitar.

The Who had premiered their rock opera Tommy album at the same tiny venue in 1969.

Townshend said he had recently given Daltrey demo recordings of three new new songs. “Happily he likes them, so we are now considering trying to get into the studio this summer. ”

He said they planned to record in a “more basic way” than normal, taking inspiration from Daltrey’s recent album with Wilko Johnson.

Townshend said The Who’s UK tour would include “hits, picks, mixes and misses”.

“A lot of our long-term fans are always trying to get us to play songs which are in the back catalogue. There’s a slim possibly that we might be able to have a few of those in the mix.”

He recalled that for The Who’s 25th anniversary tour in 1989, the band had rehearsed around 100 songs.

“We’re not going to go to that extent this time. We are hoping that there will be a few nice surprises for people who have seen us many times.”

It is thought that some new songs will feature on the tour. The band’s last album of new material was 2006’s Endless Wire.

The Who have sold more than 100 million records since forming in 1964. Their best-known albums include My Generation, Tommy and Quadrophenia.

The original line-up included drummer Keith Moon, who died from an accidental overdose in 1978, and bassist John Entwistle who died of a heart attack in 2002.

In 2013, The Who toured the UK with a full-length performance of 1973’s Quadrophenia, which inspired the 1979 film of the same name.

The Who Hits 50 UK tour begins at Glasgow SSE Hydro on 30 November and ends at London’s The O2 on 17 December.