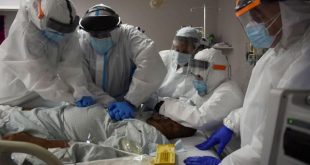 Chinese hackers broke into a US government network in an attempt to gain personal information on thousands of employees, US media report.

First reported by the New York Times, the hackers in March allegedly targeted those applying for high-level security clearance positions.

Secretary of State John Kerry called the incident an “attempted intrusion” that was still under investigation.

The report has not officially been confirmed by the US homeland security.

Both countries have long accused each other of cyberspying.

The US acknowledges that it conducts espionage but says unlike China it does not spy on foreign companies and pass what it finds to its own companies, the BBC’s China editor Carrie Gracie says.

Beijing typically shrugs accusations off as a smear motivated by those who find its growing technological might hard to bear, our correspondent adds.

Mr Kerry told the Associated Press news agency on Thursday he and Treasury Secretary Jack Lew, who are in China as part of an annual forum between the two governments, were only notified of the accusation of wrongdoing after the gathering’s conclusion.

“We did not raise it in specific terms,” he said about the latest accusation, adding it did not appear sensitive material was compromised. “We raised the subject, obviously.”

An unnamed official told the New York Times that the March attack was traced to China, but it is unclear if the latest accusation was connected to the government – a China spokesman said it was “resolutely opposed” to internet hacking.

“They have never been able to present sufficient evidence,” he said, adding China was “deeply convinced” such reports were “not worth refuting”.

In May, the US charged five Chinese army officers with hacking into private-sector American companies in a bid for competitive advantage, in the first cyber-espionage case of its kind.

While it is unlikely the officers will ever be prosecuted, the US has identified and posted photos of those they believe to be responsible.

Last year, cyber-defence company Mandiant published a report on a Chinese military unit the firm said was behind the vast majority of significant attacks on American federal agencies and companies.