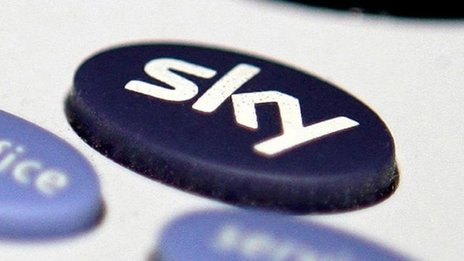 BSkyB is paying £4.9bn to take over Rupert Murdoch’s pay TV companies in Germany and Italy.

The move was announced along with the company’s annual results, which show pre-tax profits fell slightly to £1.2bn from last year’s £1.26bn.

BSkyB also reported revenues rose by 7%, with strong demand “across the board” for its services.

It said Sky Sports viewing share was at a seven-year high, boosted by the open race for the Premier League title.

In part, the Murdoch empire is paying itself to finance the deal [which] leaves the bigger question – what is the ultimate goal? ”

BSkyB’s chief executive, Jeremy Darroch, said: “The three Sky businesses are leaders in their home markets and will be even stronger together. By creating the new Sky, we will be able to use our collective strengths and expertise to serve customers better, grow faster and enhance returns.”

Majority stake holder 21st Century Fox wants to pass the ownership of the Sky businesses to BskyB to free up cash for its bid for media giant Time Warner, the company that owns Game of Thrones maker HBO and news business channel CNN.

It also thinks the pay-TV channels will be more profitable if run by one dedicated company.

The company hopes the new structure will save it £200m by the end of the second financial year with further savings to come.

BBC business editor, Kamal Ahmed, points out senior observers say that having pulled the European Sky businesses under one roof, 21st Century Fox could tidy up the business structure further by buying the other 61% of BSkyB it does not already own.

BSkyB shares were down some 5% on the news, as it will also bring higher debt levels and a stop to its current practice of buying back shares.

BSkyB broadcasts to 10 million homes in the UK.

A combined Sky Europe would have 20 million customers.