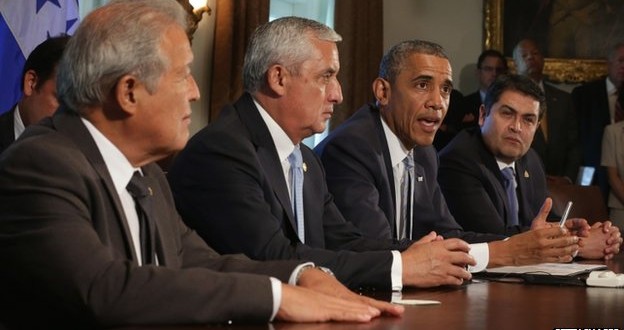 US 'will send migrant youths home'

President Barack Obama has told Central American leaders that migrant children flooding into the US without legitimate legal claims will be sent home.

The presidents of Guatemala, Honduras and El Salvador met Mr Obama at the White House on Friday to discuss the crisis at the US southern border.

More than 50,000 children, many unaccompanied, have been detained at the border since October.

Mr Obama said they must deter more children from attempting the journey.

“All of us recognise that we have a shared responsibility to address this problem,” Mr Obama told reporters at the White House on Friday, flanked by Guatemalan President Otto Perez Molina, Honduran President Juan Orlando Hernandez and El Salvador President Salvador Sanchez Ceren.

He praised his Central American counterparts for their ongoing efforts within their own nations to deter children from travelling illegally to the US, but said more work must be done to combat the “significant challenge” and alleviate the conditions that move parents to send them on the perilous trip.

The migrants – mostly from Central America – have been driven north by a spike in gang violence in their home countries, by extreme poverty, and amid incorrect rumours children will be allowed to stay if they make it across the border.

Also at issue is a 2008 US law that grants unaccompanied children from countries that do not border the US an automatic asylum hearing, thereby preventing their immediate removal from the country.

In his remarks, Mr Obama called on Republicans in Congress to postpone their upcoming August recess until they can approve legislation increasing funding to ease the crisis.

Earlier this month, his administration requested $3.7bn (£2.2bn) in emergency funds for tighter border security, care for the children, detention and removal programmes, and immigration courts.

But Republican lawmakers said they would not give Mr Obama a “blank cheque” without changes to US immigration policy.

Conservative politicians have blamed Mr Obama’s immigration policy for the crisis, and some in the Congress have called for the repeal of the 2008 asylum law.

Meanwhile, House Republicans are developing an immigration proposal not to exceed $1.5bn, while Senate Democrats are floating one for $3.6bn to meet increased immigration and security needs.