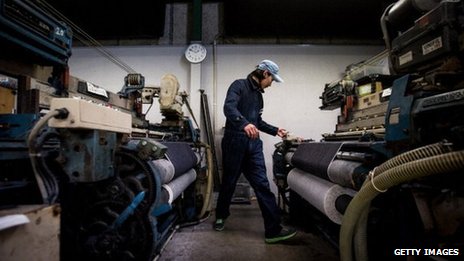 Japan output falls most since 2011

Japan’s factory output fell 3.3% from May to June, the latest sign to highlight that the recent sales tax rise is affecting consumer demand.

It is the biggest decline in output since the 2011 earthquake and tsunami.

Japan raised its sales tax, also known as consumption tax, from 5% to 8% in April this year.

There have been concerns that the move – which makes goods more expensive – may see consumers cut back on spending and hurt domestic consumption.

The weak output numbers follow data released on Tuesday which showed retail sales in June declined more than forecast, down 0.6% from a year ago.

Meanwhile, household spending in the country has also fallen in recent months.

Analysts said the weak demand was in part due to the fact that consumers and businesses had rushed to make purchases ahead of the tax rise.

“The pent-up demand ahead of the sales tax hike was bigger than expected so the consequent downturn is pretty steep, which is probably why output fell so much in June,” said Junko Nishioka, chief Japan economist at RBS Securities.

“We don’t expect output to keep falling in the current quarter as the tax hike effect is fading,” she said.

Manufacturers surveyed by Japan’s ministry of economy, trade and industry expect output to rise in the coming months.