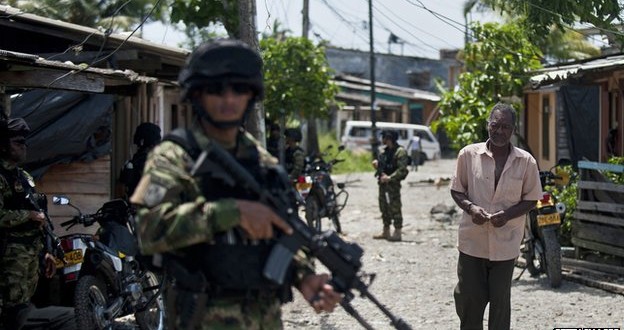 Colombian city on alert after attack

Authorities in the Colombian city of Buenaventura, on the Pacific coast, have temporarily banned the sale of alcohol and the carrying of arms.

The measure comes after an electricity tower was blown up on Monday, leaving 450,000 residents without power.

President Juan Manuel Santos blamed the attack on left-wing Farc rebels and said recent attacks such as that on the port city were threatening ongoing peace talks with the guerrillas.

He said Farc “were playing with fire”.

Buenaventura, Colombia’s most important port on the Pacific coast, and a city already wracked by gang violence, suffered a power cut on Monday evening.

Many homes in Buenaventura are basic at best. They now lack power too.

Hospitals, health centres, schools and the homes of almost half a million people were affected.

At first the authorities thought the power station had been attacked, but after flying over the rural area surrounding Buenaventura, the military said at least one key pylon had been blown up.

Locals reported hearing an explosion just before the power went out.

Buenaventura Mayor Bartolo Valencia asked the military to secure the area to allow workers to re-establish the cut-off lines as soon as possible, but the energy company says it could take up to three days.

Fear of the dark

Buenaventura was left without power for three days once before in 2012 after a similar rebel attack.

Buenaventura has one of the highest murder rates in Colombia

Hospitals and the offices of the port authority have generators, but residents say they have no way of keeping their basic foodstuff refrigerated.

The power cut came just days after 16,000 people were left without water when an aqueduct was blown up in eastern Meta province, an attack which has also been attributed to the Farc,

President Santos warned the rebels that he would end peace talks unless the group stopped targeting civilians.

Government and rebel negotiators have been meeting since November 2012 and have reached agreement on three key agenda issues, but many Colombians are getting impatient with the slow pace of the talks.

Mr Santos said he would travel to Buenaventura later on Wednesday for a security summit.

Local authorities fear gang members may take advantage of the darkness to drive up Buenaventura’s record murder rate even further.