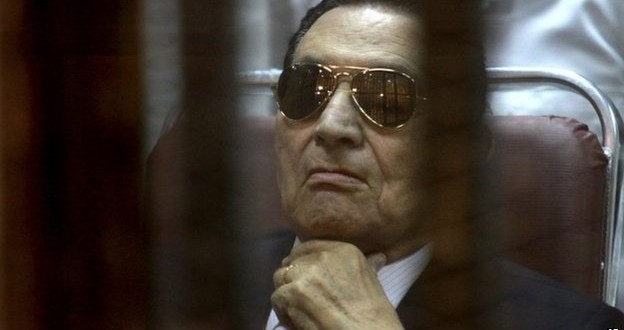 An Egyptian court is expected to deliver its verdict in the retrial of ousted President Hosni Mubarak on charges of conspiring in the killing of protesters during the 2011 uprising.

Last year, an appeals court overturned an initial life sentence given to Mubarak in 2012 on technical grounds.

If acquitted, Mubarak will not be released as he is serving a three-year sentence for embezzling public funds.

The 86-year-old denies all the charges against him.

In 2012, Mubarak – along with former Interior Minister Habib al-Adly – was sentenced to life in prison in 2012 for complicity in the deaths of demonstrators during the 2011 revolt that eventually forced him to resign.

But in January 2013 the Court of Cassation upheld an appeal by the two men against their convictions on technical grounds and ordered a retrial.

In August, a court ordered Mubarak’s release from prison and transfer to a military hospital in Cairo, where he is being held under house arrest.

His sons Gamal, the president’s one-time heir apparent, and Alaa, a businessman, are also being retried on separate corruption charges.

Mubarak’s Islamist successor Mohamed Morsi lasted only a year in power following elections before being ousted by the military in July 2013.

The move followed four days of mass anti-government protests and Mr Morsi’s rejection of an ultimatum from the generals to resolve Egypt’s worst political crisis since the 2011 upheaval.

In a separate development on Friday, at least two demonstrators died in clashes between Islamist protestors and police in the capital Cairo.

The protests were called by an ultra-conservative Salafi group, which opposed the overthrow of Mr Morsi.

The group asked protestors to defend what it called Egypt’s “Islamic identity”.