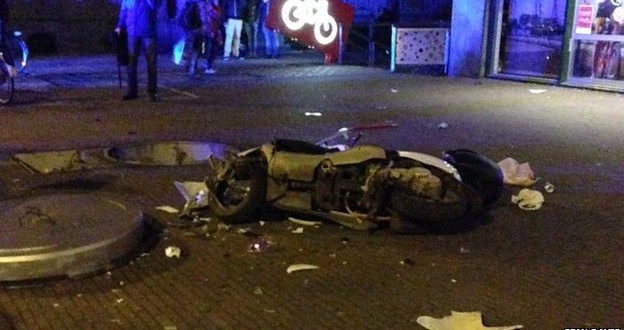 A man in Amsterdam posted this image shortly after the incident, saying “feeling lucky”

A man in the Dutch city of Amsterdam has been injured after a pop-up public toilet sunk into the ground emerged unexpectedly.

The man was hit by a moped which was thrown up in the air as the so-called UriLift toilet suddenly rose up.

He is being treated in hospital for minor injuries.

The toilets are a feature of central areas of Amsterdam, emerging at night to deter people from urinating in the streets.

Witnesses nearby reported hearing a loud bang at the time of the accident.

One man tweeted an image of the aftermath, writing: “Literally just walked past this explosion about two minutes before. Feeling lucky.”

It is not clear what caused the incident.

Results of an investigation are due after the weekend.