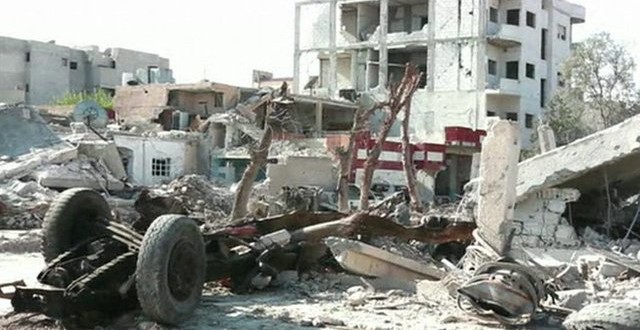 Fighting has intensified in the besieged Syrian border town of Kobane, where Kurdish forces have been holding Islamic State at bay since September.

IS militants launched at least four suicide attacks, with reports saying at least 25 people were killed.

The first of the attacks was near the Turkish border crossing. It is thought to be the first fighting in that area.

The battle for Kobane has left hundreds of people dead and forced more than 200,000 to flee into Turkey.

The US-led coalition is supporting the town’s defenders with air strikes.

Turkey has allowed some Kurdish fighters from Iraq to travel through Turkey to assist in defending Kobane.

IS controls large swathes of both Syria and neighbouring Iraq.

The militants have been trying to overrun Kobane for the past two months.

In the early stages, it looked as though the town’s fall was only a matter of time. But the Kurdish fighters have defended tenaciously and kept hold of roughly half the town.

They have been supported by a small number of well-armed Iraqi Kurdish fighters, some other Syrian opposition units, and of course by the coalition air strikes.

The first suicide vehicle bomb on Saturday targeted a Kurdish position close to the Turkish border at dawn on Saturday.

Kurdish sources said the bomber had crossed from Turkey, but Turkish officials denied this.

Clashes followed at the site of the attack and to the south-west of the town.

The UK-based activist group, the Syrian Observatory for Human Rights, said there were three more suicide bombings – one an individual with a suicide vest and the other two vehicle bombs.

As the clashes intensified, there were reports that IS had brought up tanks to join the fighting.

Meanwhile two US-led air strikes were carried out against IS positions in the east of Kobane.

IS has captured parts of the town and dozens of villages in the area around it in an offensive lasting more than two months.

But it has met stiff resistance from local Kurdish fighters, who have held about half the town assisted by small numbers of Iraqi Kurds and Syrian Arabs, and backed by US-led air strikes.