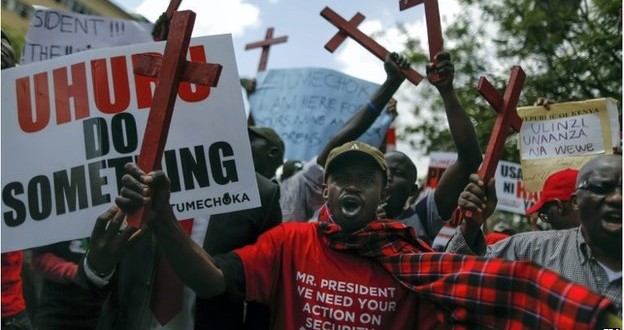 Gunmen have killed some 36 quarry workers near the north Kenyan town of Mandera, aid workers and officials say.

The attackers separated Muslims from non-Muslims and shot the Christians dead, residents said.

Earlier, one person was killed in a bar popular with non-Muslims in a neighbouring district.

Islamist militants from the Somalia-based al-Shabab group killed 28 people in an attack on a bus targeting non-Muslims in the same area last week.

The attack on the quarry workers took place early on Tuesday. Witnesses said the victims were caught after midnight, while sleeping in their tents at the quarry.

Kenya’s Red Cross said on its Twitter feed that security personnel and one of its own teams were on the ground at the site of the attack.

Reuters news agency quoted one witness as saying that most of the victims had been shot in the head, and four had been beheaded.

In the attack on a bar in the town of Wajir earlier on Monday night, gunmen reportedly opened fire and hurled grenades, killing one and injuring 12.

No group has so far said it carried out either of the attacks, both of which occurred close to the border with Somalia.

Al-Shabab has stepped up its campaign in Kenya since 2011, when Kenya sent troops across the border to help battle the militants.

Are you in Mandera? Have you been affected by the violence? You can share your experiences by emailing [email protected].