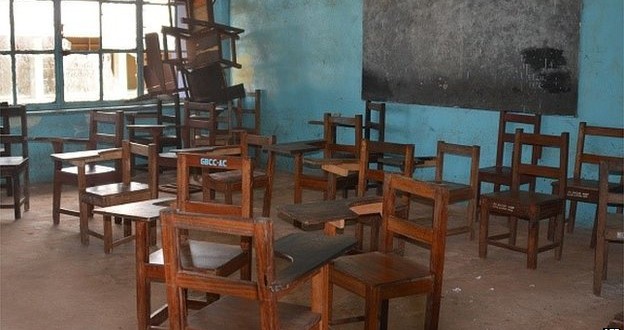 The closure of schools could destroy the future of children, campaigners say

A campaign group has urged the rapid reopening of schools in three Ebola-hit West African states as some 5m children are being denied education.

Education had become “one of the first casualties of the crisis” in Guinea, Liberia and Sierra Leone, it added.

The “most marginalised” would bear the brunt of the crisis for generations to come if “safe schools” were not reopened, the group said.

Ebola was declared a health emergency after it was identified in March.

Sierra Leone President Ernest Bai Koroma said the country still had only 406 beds, or less than one-third of the number required, to treat Ebola patients.

The UK has been heavily criticised by Sierra Leoneans for being slow in building a promised treatment centre.

The World Health Organization (WHO) says 6,055 people have died of the deadly virus in the three states.

Schools were shut to reduce the risk of children becoming infected.

The Global Business Coalition for Education said reopening schools would not only give children an education, but it would also provide a “first line of defence in tracing and monitoring potential cases of Ebola”.

Indications were that 54% of children were unlikely to return to the classroom if they were out of school for a year, its report, published in collaboration with A World at School, said.

“Being out of school can have a crippling impact for vulnerable children, especially girls who are more subject to high-risk situations, including pregnancy and early marriage,” it added.

“The risk of child labour increases rapidly as contributing to the household economy becomes critical for families.”

Meanwhile, US President Barack Obama renewed calls on Tuesday for Congress to approve $6bn (£3.8bn) in emergency aid to fight the outbreak.

It described it as patchy and slow, with the job of tackling the crisis largely left to doctors, nurses and charity organisations.

The MSF report said foreign governments – notably the UK in Sierra Leone and most recently China in Liberia – were continuing to build Ebola treatment centres.

But these were sometimes in the wrong places and using under-qualified local staff.

This week 250 Nigerian healthcare workers have been trained in Lagos ready for deployment to Ebola-hit countries as part of the African Union’s efforts to help combat the epidemic.