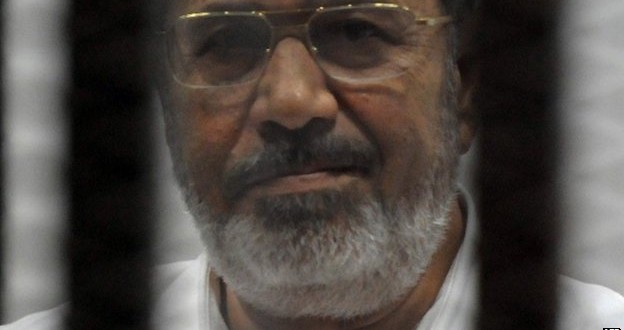 Egypt’s prosecutor general’s office is investigating what it describes as a “fabricated” recording of top officials discussing the detention of ousted Islamist President Mohammed Morsi.

The audio recording is alleged to be of security officials debating illegal means to prevent the possible collapse of the case against Mr Morsi.

It was broadcast on an Islamist-linked TV channel and has not been verified.

Mr Morsi’s arrest in 2013 was followed by a crackdown on his supporters.

His Muslim Brotherhood party was banned, hundreds of its activists have been killed and hundreds more are in jail.

The government of Abdul Fattah al-Sisi, a former military chief who succeeded Mr Morsi as president, has been accused of violating human rights and pursuing authoritarian tactics.

The recording purports to date to the period soon after Mr Morsi was overthrown in July last year, when he was in detention.

On the recording, a man alleged to be a legal adviser to the Defence Ministry warns that the case against Mr Morsi could collapse if his defence lawyers challenge his detention at a military facility.

Senior officials in the recording allegedly discuss re-classifying the facility retroactively as a civilian one, in order to thwart any challenge by his lawyers.

The recording was broadcast on Thursday and sparked uproar on social networks.

However, its authenticity has not been independently confirmed.

In a statement on Friday, Egypt’s prosecutor general’s office accused the Muslim Brotherhood of fabricating the recording “using advanced technology” with the aim of “causing disruption and destabilising society”.

The prosecutor warned that such acts would be “punishable by law”.

Mr Morsi was not seen in public for several months after he was forced from office amid street protests in July 2013.

He appeared next in November, to face trial along with other Muslim Brotherhood leaders.