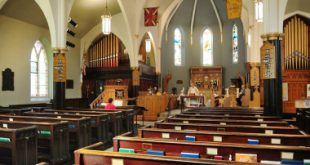 Scuffles broke out at a protest in Delhi over the case

A woman in India says she was raped by a taxi driver after booking the cab using the popular Uber smartphone app.

The 26-year-old from Delhi told police she dozed off in the taxi and when she woke up the vehicle was parked in a secluded part of the capital.

A medical examination found she had been raped, police say. A man suspected of being the driver has been arrested.

The latest incident comes amid increasing concern at sexual violence against women in India.

Uber, which enables customers to book and pay for taxis online, said it was co-operating with the police.

“Our thoughts are with the victim of this terrible crime and we are working with the police as they investigate,” it said in a statement.

The woman, who works in finance, told police she called the taxi on Friday evening after dining at a restaurant.

India is one of dozens of countries where Uber is popular

After the driver raped her, she alleged he warned her she would be hurt if she raised the alarm. He then dropped her off near her home.

Uber, which is growing in India, has been accused of failing to conduct adequate checks on its drivers.

“Our initial investigations have revealed shortcomings of the private cab company which didn’t have GPS installed in its cabs and the staff wasn’t verified,” Delhi Special Commissioner Deepak Mishra said.

But Uber, which is based in San-Francisco, said safety was paramount, and said it had GPS traces of all journeys.

“We work with licensed driver-partners to provide a safe transportation option, with layers of safeguards such as driver and vehicle information, and ETA-sharing [estimated time of arrival] to ensure there is accountability and traceability of all trips that occur on the Uber platform,” its statement added.

Uber, established in 2009, is present in dozens of countries and recently attracted investment which values it at $40bn (£25bn).

The latest allegation of rape has again put the spotlight on the issue of sexual violence against Indian women, following a series of recent incidents.

It comes only days before the second anniversary of the gang rape and murder of a student on a bus in Delhi, which prompted outrage and a tightening of the laws on sexual violence.