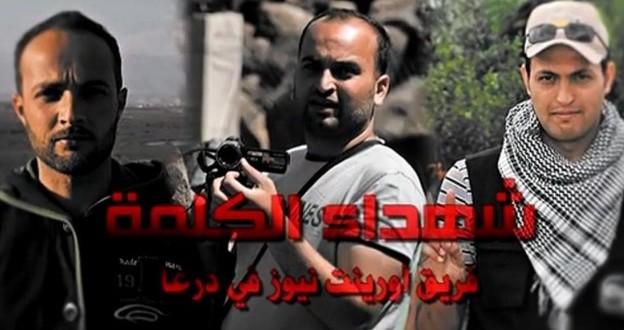 Three journalists from the Syrian opposition TV channel Orient News have been killed while covering clashes in the country’s south-west, reports say.

A missile hit their vehicle while they travelled to Sheikh Miskeen in Deraa province, Orient News told the Committee to Protect Journalists (CPJ).

The channel said it believed they were directly targeted by government forces.

More than 70 journalists have been killed while covering the conflict in Syria over the past three years.

The vast majority of them are local reporters, according to the CPJ.

Orient News said correspondents Rami Asmi and Yousef El-Dous and cameraman Salem Khalil had been on their way to Sheikh Miskeen on Monday to report on recent rebel advances, following weeks of fighting in the area, when their car was hit by a guided missile.

Minutes before they were killed they had driven past government forces in the village of Qarfa, from where the missile was launched, it added.

The car was not marked as a press vehicle, but Orient News said it was identifiable because it was carrying a satellite dish almost 1.8m (6ft) in diameter.

The CPJ said it could not independently verify the claim that the car had been directly targeted, but that its research showed government forces had likely targeted journalists directly in an attempt to censor their work.

“So many Syrian journalists have paid the ultimate price for reporting on this conflict, but even for Syria, the loss of three journalists in one attack is devastating,” said CPJ Middle East and North Africa Program Co-ordinator Sherif Mansour.

“Journalists covering conflict are civilians and we call on Syrian authorities to respect that status.”

While most of the world’s attention has been focused on battles between rebels, Islamic State militants and government forces in northern Syria, pro-Western rebels south of the capital Damascus have successfully taken territory and held it over the past three months, in Deraa province, along the Jordanian border and along the Golan Heights.