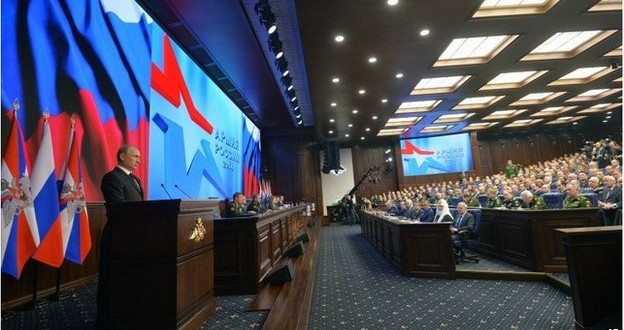 Russians ‘will not cave in’ to West

Russia says it will not “cave in” to pressure, following a fresh set of US, EU and Canadian sanctions over the conflict in Ukraine.

A spokesman said Moscow regretted “that the West is yet again displaying a complete lack of interest” in resolving the crisis in south-east Ukraine.

The US sanctions focused on Crimea, which was annexed by Russia in March.

US President Barack Obama signed an executive order to ban the export of goods, technology and services to Crimea, in addition to new sanctions on Russian and Ukrainian individuals and companies.

Mr Obama said the move showed the US would never accept Russia’s annexation of Crimea.

Similar measures agreed by the European Union earlier this week came into effect on Saturday. Canada announced its own sanctions on Crimea on Friday.

After the peninsula was annexed, pro-Russian separatists took control of parts of the Donetsk and Luhansk regions of eastern Ukraine in April, and later declared independence.

Some 4,700 people have died and another million have been displaced by fighting in recent months.

On Friday, five Ukrainian soldiers were killed in fighting – the highest death toll since the latest attempt at a ceasefire began on 9 December.

In addition to the goods, technology and services ban, US individuals or companies cannot now buy any real estate or businesses in Crimea or fund Crimean firms.

The new measures also include sanctions on 24 Ukrainian and Russian individuals and on a number of companies deemed to be destabilising Ukraine.

They include the Russian equity investment group, Marshall Capital Partners. The Night Wolves biker group is also targeted for its involvement in military action in Crimea.

The European Union announced its own sanctions against the region on Thursday. All investment in Crimea is banned, as is participation in Russian oil and gas exploration in the Black Sea. European cruise ships will not be able to visit the peninsula’s ports.

But like the EU, Mr Obama said he would not yet impose new sanctions on Russia itself, urging it again to de-escalate the tension in eastern Ukraine.

“The US and Canada still cannot come to terms with the results of the free expression of will that the residents of Crimea and Sevastopol made in March,” Russia’s foreign ministry spokesman Aleksandr Lukashevich said in a statement.

“The residents of Crimea today are together with the whole Russian people, who have never caved in and will not cave in to external pressure.”

Mr Obama said: “I again call on Russia to end its occupation and attempted annexation of Crimea, cease its support to separatists in eastern Ukraine, and fulfil its commitments under the Minsk agreement.”

The agreement signed by Ukraine and the rebels in Minsk, in Belarus, in September, put in place a ceasefire and set out the terms for a peace process.

But Mr Lukashevich said sanctions against rebel leaders in the Luhansk and Donetsk regions of eastern Ukraine undermined the political process.

He concluded by advising Washington and Ottawa “to consider the consequences” of their actions.

More than 1,000 people have been killed since the Minsk deal.

The Ukraine crisis began a year ago, when pro-Moscow leader Viktor Yanukovych abandoned an agreement on closer trade ties with EU in favour of closer co-operation with Russia.