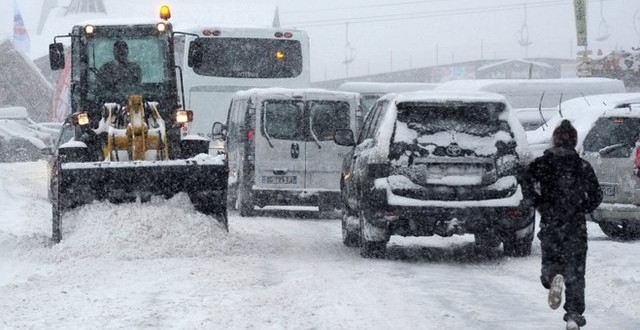 Writer and journalist Rachel Johnson, whose car is stuck in snow outside Geneva, Switzerland, described conditions

Snow and ice in the French Alps have stranded 15,000 vehicles, snarling up holiday traffic to and from ski resorts, French media report.

The country declared an orange weather alert, its second-highest, as local authorities scrambled to put up motorists for the night.

One man died when his vehicle slid into a ravine in the Isere region.

The government asked drivers to “exercise the utmost caution” and avoid travel if possible.

Three people died in other snow-related incidents across France earlier this week, according to French daily Le Monde.

Snowy conditions in the French Alps are expected to persist into Sunday, followed by freezing weather next week when Paris should see its first frosts in more than a year, French weather forecasters say.

Local gyms and community halls were opened up as shelters in the Savoy region on Saturday.

Motorists seeking accommodation “stormed” the Chambery exhibition centre, according to a live page (in French) on the website of Le Dauphine Libere newspaper.

Mr Rigby, who is returning to the UK with his family from a skiing holiday, said they had received no help from the French authorities, and had had to rely on other motorists for information.

He felt most sorry for the drivers who had, unlike himself, set out without snow chains.

“The police should have got people to fit chains this morning after half a metre [20 in] of snow fell last night,” he said, as he prepared to travel on through the night.

Strong winds caused damage elsewhere in France, shutting the port of Calais, where an anti-migrant fence was partially toppled.

Closer to Paris, the celebrated gardens of Versailles were closed to the public because of gales.

Heavy snow caused disruption to roads in Germany too, causing a 25km (16-mile) traffic jam on the A8 motorway near Stuttgart.

In the UK, the Met Office issued warnings of ice across the country and snow in some areas. Hundreds of homes were without power in parts of England, including nearly 500 in the East Midlands and nearly 300 in Devon.

In the south-western city of Stuttgart, the sudden snow caked the roof of a disused novelty tram car outside the city’s Pig Museum

In the same city in Germany’s Hesse region, some people sought to make the best of the white stuff

Parts of the Netherlands saw snow on Saturday too. One BBC News user, Kath, sent in this photo from Roosendaal