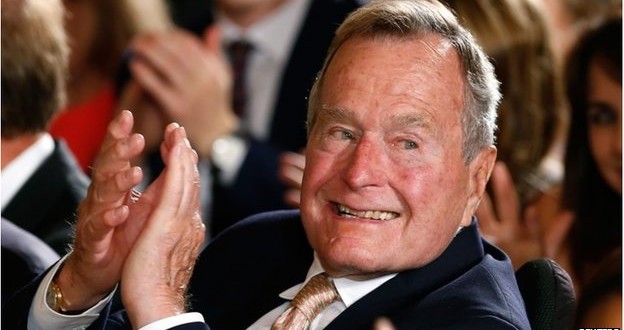 George HW Bush is the oldest living former US president

Former US President George Bush Sr will remain in hospital this weekend but could be discharged soon, his spokesman says.

Mr Bush, 90, was admitted to hospital on Tuesday after suffering from a shortness of breath.

His spokesman Jim McGrath said his condition had improved and doctors were “discussing dates for his discharge”.

Two years ago, Mr Bush was treated in the same hospital for more than two months for a bronchitis-related cough and other issues.

He is the oldest living former US president and a World War II veteran. He can no longer use his legs, but in June celebrated his 90th birthday by making a tandem parachute jump.

Another son, Jeb, said this month he will “actively explore the possibility of running for president” in 2016.