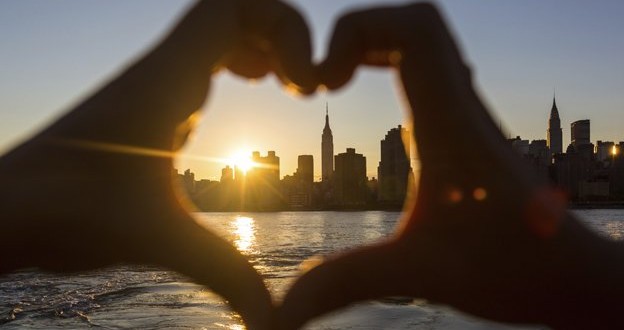 How the fairytale of New York can become a nightmare

New York City at Christmas is often considered magical, with the giant Christmas tree at the Rockefeller Center, ice-skating at Bryant Park and a stream of department-store Santas up and down Fifth Avenue. But I don’t buy it.

Somewhere near Lexington Avenue I snapped. I’d spent three days with a BBC colleague given to uttering sweeping generalisations as breathtaking as a cold winter gust bursting down Broadway.

“The food here is better than anywhere on Earth.”

“Grand Central Station is the most beautiful train station in the whole world.”

Up ahead I spotted a rack of T-shirts sporting that ubiquitous logo – you know the one – black typewriter font with an insipid little red heart.

Now to be fair the truth is more complex. And later I want to tell you more about that I-heart-New-York logo.

Lighting the Christmas tree at the Rockefeller Center

But my reaction to my (British) colleague’s enthusiasm for the Big Apple set me thinking about why, over the course of numerous visits from childhood until now, this city has always rubbed me slightly the wrong way.

Listen to From Our Own Correspondent for insight and analysis from BBC journalists, correspondents and writers from around the world

Broadcast on Radio 4 on Saturdays at 11:30 BST and BBC World Service

Wandering along the admittedly stunning High Line, a newish multi-level park created out of the remnants of the city’s industrial past, I enumerated the reasons.

First a minor irritation. When you fly seven hours from London you should be able to count on the place you land seeming definitively foreign.

But New York now is lousy with British graphic designers and bankers.

All the music blaring out in Brooklyn bars these days is either actually British, or made by young Americans ripping off Mumford and Sons.

Tea shops are everywhere and I fear for the future of the letter zee. Some call all this anglifying sophisticated and outward-looking – I call it recolonization.

The second thing I find most annoying about New York is that there you can have anything you want, as long as you pay for it. Put another way, it’s a great place, if you have money, and a terrible place, if you don’t have money.

Things have got so out of hand that you can actually pay to bypass normal security lines at the airport – $85 and a background check will give you the right to keep your laptop in your bag and your shoes on your feet.

One mustn’t be delayed by those huddled masses, I suppose.

Then there’s the aggression and annoyance to be found on every New York street, and most of its avenues.

An hour after landing at the airport – having gone through security with the normal people – I’d been barked at by a pizza chef, a taxi driver, a guy selling bus tickets, and some random woman crossing the street.

The city’s rudeness is of course legendary, but what really sets it apart is its completely unapologetic nature. Actually it’s even more than that. New Yorkers are proud of being brash, loud, and offensive. They like it.

But those reasons, compelling as they are, are not entirely damning, or unique. After all, in London there is no shortage of razor-sharp elbows, class conflict, or masses of upwardly mobile British people.

No, something else was getting under my skin.

Then in one of those early morning cocktail-induced visions – the kind that only really truly happens in the city that never sleeps – it came to me. New Yorkers have no room in their minds for the possibility of failure.

You see, Londoners are all too aware of their city’s shortcomings – they would tell you all about the horror of transport, of house prices, of winter, if they ever deign to speak to you.

But New Yorkers do not have the will to contemplate the goal not reached. They cannot even countenance the possibility that their city is not the centre of – well the world is too small – the universe is more like it.

They are special and they will win. Theirs is a perverse version of the doctrine of American exceptionalism, both writ as big as the Empire State Building, and shrunk from a whole continent down to five boroughs.

Now I promised to tell you about that logo. It’s actually part of a tourism campaign dating from late 1970s.

As a child growing up in the western part of the state – as far from New York City as London is from Edinburgh – I saw that goofy red heart pop up all the time on television, splashed across pictures of Niagara Falls, lakes so placid that one is actually called Lake Placid, and the soaring Adirondack mountains.

But those state-wide meanings are now lost. When you see I-heart-N-Y, you think of skyscrapers and Fifth Avenue, Central Park and the Statue of Liberty.

That logo has been shamelessly stolen by New Yorkers, who should be called New York City-ers, but I guess they’ve swiped a demonym as well.

Now, I know that writing this piece is futile because of all the world’s unfeeling cities, New York is the most unfeelingest.

It doesn’t give a damn what you or I think of it.

For every person slinking away from Gotham having failed to find their street paved with gold, two more will turn up – from Albany, or Accra, or St Albans – to replace them.

The city will continue to fuel world’s biggest dreams. And that, I must concede, is the fatal flaw in my argument.

New York – love it or loathe it – will roll on.

How to listen to From Our Own Correspondent:

Subscribe to the BBC News Magazine’s email newsletter to get articles sent to your inbox.