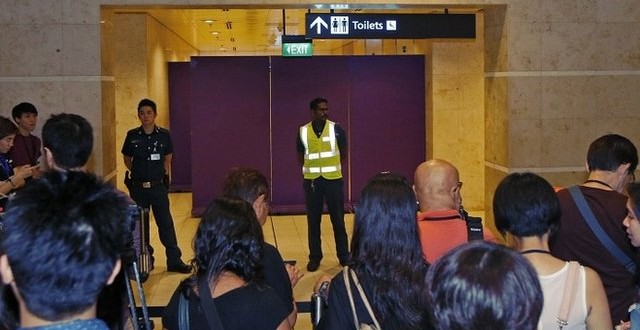 An AirAsia Indonesia airliner flying from Indonesia to Singapore with 162 people on board has gone missing.

The plane, an Airbus A320-200, disappeared midway into the flight of more than two hours from the city of Surabaya. No distress call was made.

Bad weather was reported in the area, and an air search operation has now been suspended for the night.

Planes from Indonesia and Singapore had been scouring an area of sea between Kalimantan (Borneo) and Java. Some boats are reported to be continuing to search as night falls.

No wreckage has been found, an Indonesian official told the BBC.

The missing jet had requested a “deviation” from the flight path due to storm clouds, AirAsia said.

AirAsia, a budget airline which owns 49% of AirAsia Indonesia, is based in Malaysia and has never lost a plane.

However, 2014 has been a difficult year for aviation in Asia: Malaysia’s national carrier Malaysia Airlines has suffered two losses – flights MH370 and MH17.

Flight MH370 disappeared on a flight from Kuala Lumpur to Beijing in March with 239 passengers and crew. The wreckage, thought to be in southern Indian Ocean, has still not been located.

MH17 was shot down over Ukraine in July, killing all 298 on board.

Flight QZ8501 was supposed to arrive early this morning. Hours later the families of the passengers gathered here have very little information.

Airport officials are keeping them well away from the media and trying to make them comfortable.

The AirAsia incident comes at the end of a difficult year for air travellers in the region, and the scenes at Changi airport today are reminiscent of those in Kuala Lumpur immediately after MH370 went missing in March: anxious relatives waiting for any news on their loves ones, a media frenzy, but no answers.

Anxious family members have been arriving at the airport in Surabaya

The flight arrivals board at Changi Airport in Singapore, where the AirAsia flight was due

There were 155 passengers on board, the company said in a statement:

Dozens of passengers’ relatives have been gathering at Juanda airport in Surabaya and Singapore’s Changi airport to hear news.

Changi airport authorities have set up a holding area for relatives. It said 47 had arrived and care officers and counsellors were on hand to provide support.

AirAsia’s Chief Executive Tony Fernandes tweeted: “Thank you for all your thoughts and prayers. We must stay strong.”

AirAsia Indonesia operates domestic flights round the Indonesian archipelago as well as international services to Malaysia, Singapore, Australia and Thailand.

AirAsia Indonesia, along with other Indonesian airlines, was banned from flying to the European Union in 2007 due to safety concerns but this was lifted in July 2010.

William Kai waits in Surabaya: “We still have hope. We cannot lose hope”

Are you, or is someone you know, affected by this story? Do you know any of the passengers on the AirAsia flight? You can email [email protected] with any information. Please leave a telephone number if you are willing to be contacted by a BBC journalist.