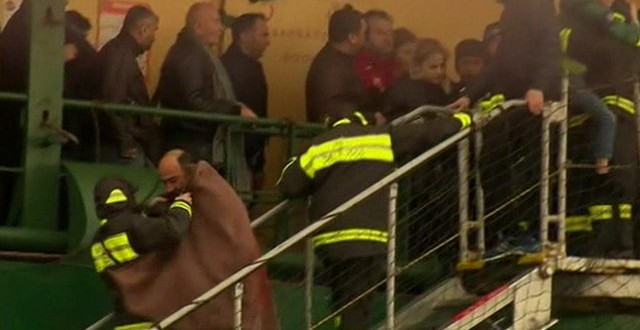 Exhausted and separated families were desperate to reunite

The death toll following a fire on the Norman Atlantic ferry off Corfu has risen to eight, with the evacuation of all those on board now complete.

One man was killed when trying to escape the ship, and a further seven bodies have since been found.

More than 400 people were rescued, in a long and complex operation amid gale-force winds and thick smoke.

The captain of the ferry was the last to be rescued, more than 36 hours after sending out a distress signal.

Captain Argilio Giacomazzi handed control of the stricken vessel to the Italian navy at 1350 GMT on Monday.

It is unclear what caused the fire to break out on Sunday on the car deck of the ferry.

Italian prosecutors announced on Monday that they had opened a criminal investigation into the fire and would look into whether negligence had played a role.

The ferry company operating the journey from the Greek city of Patras to Ancona in Italy said a total of 478 people were on board.

A 62-year-old Greek man was the first of the fatalities to be recovered. He and his wife, who was injured, had fallen into the water as they tried to reach a lifeboat.

Teodora Douli, 56, told Ansa news agency that her husband may have hit his head as he fell. “I tried to save him but I couldn’t,” she said.

Another seven bodies were found later.

People were taken off the ship individually by helicopter, an Italian navy spokesperson said.

More than 100 people were rescued during the night, despite challenging conditions

Some of the passengers have needed treatment for hypothermia

Most of the rescued passengers were transferred to nearby ships, although some were taken directly to hospital.

Three children and a pregnant woman were among those being treated in hospital for hypothermia, according to the Associated Press news agency.

Passengers described panicking as the heat on the ferry rose, then freezing as they stood on decks awaiting rescue.

The wife of one of the cooks told journalists she had had a call from her husband saying: “I cannot breathe, we are all going to burn like rats – God save us.”

Nick Channing-Williams: “Panic set in when the floor caught fire and the paint started bubbling”

Another passenger told Greek TV station Mega: “We are outside, we are very cold, the ship is full of smoke, the boat is still burning, the floors are boiling, underneath the cabins it must be burning since 5 o’clock, the boats that came (to rescue us) are gone, and we are here. They cannot take us.”

Coast Guard Adm Giovanni Pettorino said that a member of the Italian military had been injured during the rescue.

Most of those on board were Greek. Mr Lagadianos told AP that 234 passengers and 34 crew members were from the country.

Others came from Italy, Turkey, Albania, Germany and several other countries. Four British nationals have been rescued from the stricken ferry, according to the UK Foreign Office.

The chief executive of the Visentini group that owns the vessel, Carlo Visentini, said the ferry had passed a recent technical inspection despite a “slight malfunction” in one of the fire doors, Italy’s Ansa news agency reports.

“The tests confirmed that the boat was in full working order,” he said, adding that the fire door had been repaired “to the satisfaction of the inspectors”.

Ferries are an important mode of transport between Greece’s hundreds of islands as well as neighbouring countries.

Are you, or is someone you know, affected by this story? Do you know any of the passengers on the ferry? You can email [email protected] with any information. Please leave a telephone number if you are willing to be contacted by a BBC journalist.