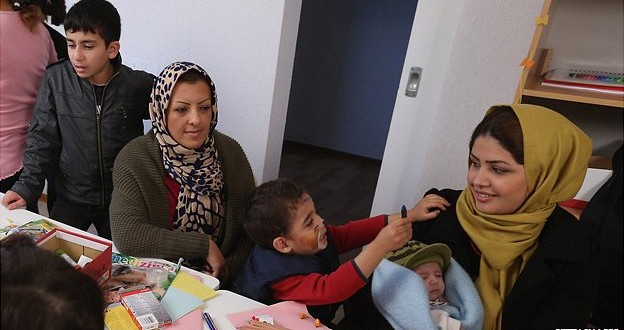 Refugees in Germany: language rights are a sensitive political issue

Immigrants should speak German not only in public but also in the home, Bavaria’s governing conservatives say – provoking a torrent of criticism.

The Christian Social Union (CSU), an ally of German Chancellor Angela Merkel, says it is a matter for debate, and is not yet official policy.

Some express alarm about politics reaching into the home.

The hashtag is an ironic joke at the CSU’s expense, as “Yalla” is Arabic for “let’s go!”

The CSU draft proposal says “people who want to remain here on a permanent basis should be encouraged to speak German in public and within the family”.

The general secretary of the centre-left Social Democrats (SPD), Yasmin Fahimi, said the CSU had “arrived in Absurdistan.

“It would be hilarious if it weren’t so dangerous,” she said. The SPD, like the CSU, is in coalition with Ms Merkel’s Christian Democrats (CDU) at national level.

The SPD’s leader in Bavaria, Natascha Kohnen, suggested the proposal would be impossible to enforce, saying “all we need now is the CSU language police, to control all of this”.

CDU General Secretary Peter Tauber said “I think it’s nothing to do with politics whether I speak Latin, Klingon or Hessian at home”.

And the Greens leader in Bavaria, Eike Hallitzky, joked that the CSU’s next move might be to tell citizens to have blue-and-white carpets at home – the colours of the Bavarian flag.

The CSU has played a prominent role in pushing immigration higher up the political agenda.

German official data shows that Turks formed the largest foreign-born group in Germany in 2013 (1.5m), followed by Asians, non-EU Europeans (including Russians and Bosnians), and immigrants from EU members Poland and Italy.

Do you live in Germany? Do you agree that immigrants should speak the language of their host country in the home as well as in public? Send your views to [email protected]