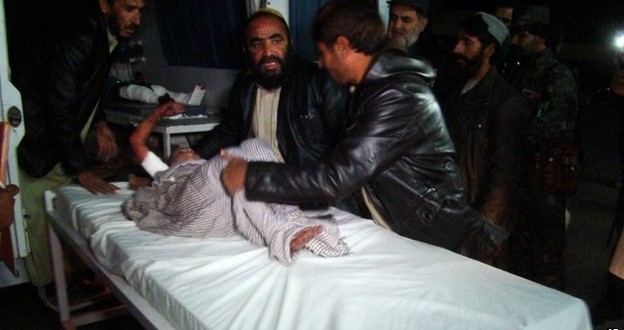 Children were among the injured taken to hospital

At least 15 people have been killed in Afghanistan when a wedding party was hit by a stray rocket, officials say.

More than 40 others were wounded, including women and children, when the rocket struck a house being used to host the wedding in the southern province of Helmand.

The owner said guests were gathering outside to welcome the bride, adding nine of his own children were missing.

The injured were taken to hospital in Lashkar Gah, the provincial capital.

The incident happened on Wednesday during fierce fighting between Afghan soldiers and Taliban militants.

It was the last day of the United States and Nato combat missions in Afghanistan.

From 1 January the alliance’s role will shift to a mainly training and support mission for the Afghan army.

Nato’s Afghan deployment began after the 9/11 attacks against the US in 2001.

But more than a decade after this long and expensive mission began, the Taliban are still active and gaining in strength, launching a number of attacks in recent months.

Nearly 3,500 foreign troops have been killed since the beginning of the Nato mission.