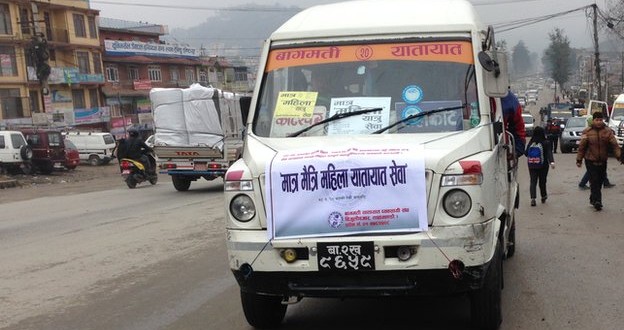 A women-only minibus service has been launched in Nepal’s capital Kathmandu to reduce sexual harassment on the city’s frequently overcrowded routes.

The chairman of the company behind the venture says the aim is to make women feel more comfortable and secure.

Four 17-seat vehicles will run on key routes in the city during rush hour.

Around a quarter of young women in Nepal have been subjected to sexual harassment on public transport, according to a 2013 World Bank survey.

All buses in Kathmandu have to designate a certain number of seats as “women-only” by law, but critics say the rule is poorly enforced.

Bharat Nepal, who chairs the Bagmati Transport Entrepreneurs Association behind the scheme, said it was designed to address the longstanding issue of sexual harassment, which is particularly problematic during peak hours.

The buses will run on Kathmandu’s busy Kalanki-Balkot route.

There is currently just one woman conductor across the company’s four vehicles but Mr Nepal says the aim is to eventually run the service with an all-female crew.