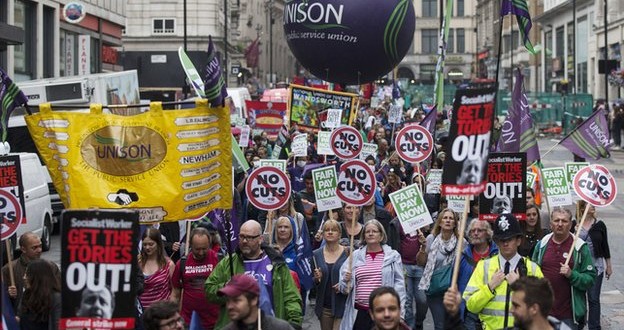 The Conservative Party says it will make it harder to call strikes in certain “core” public services if it wins the general election.

Under the plans, a strike affecting health, transport, fire services or schools would need the backing of 40% of eligible union members.

Currently, a strike is valid if backed by a simple majority of those balloted.

The Tories have already proposed a minimum 50% turnout in strike ballots, which unions say is “anti-democratic”.

They would also end a ban on using agency staff to cover for striking workers, impose a three-month time limit after a ballot for action to take place and curbs on picketing.

The package of measures will feature in the party’s manifesto for May’s general election.

Ministers have repeatedly clashed with trade unions over pay – with a 1% cap on increases in the public sector – as well as changes to pensions and retirement ages.

Last summer hundreds of thousands of public sector workers took part in a day of strike action across the UK, with Prime Minister David Cameron saying it was “time to legislate”.

But he added: “It is wrong that politicised union leaders can hold the country to ransom with demands that only a small percentage of their members voted for. That causes misery to millions of people; and it costs our economy too.”

He said the changes, which would be introduced in the first session of a Conservative-led Parliament, would “increase the legitimacy” of strike action held by unions.

“It is only fair that the rights of unions are balanced with the rights of hard-working taxpayers who rely on key public services.”

The TUC has previously said imposing a minimum turnout would leave unions with “about as much power as Oliver Twist”.

Unison general secretary Dave Prentis said the proposed measures would make it “virtually impossible for anyone in the public sector to go on strike”.

This, he added, would “shift the balance completely in favour of the government and employers, and away from dedicated public servants.

“The UK already has tough laws on strikes – there is no need to make them stricter still.”

And GMB general secretary Paul Kenny said: “Only 16 out of 650 elected Members of Parliament secured the support of 40% of those entitled to vote in their parliamentary constituency area election in 2010.

“Only 15 Tory MPs out of 303 secured that level of support. They had no hesitation in forming a government in 2010 without securing 40% support from the electorate.”