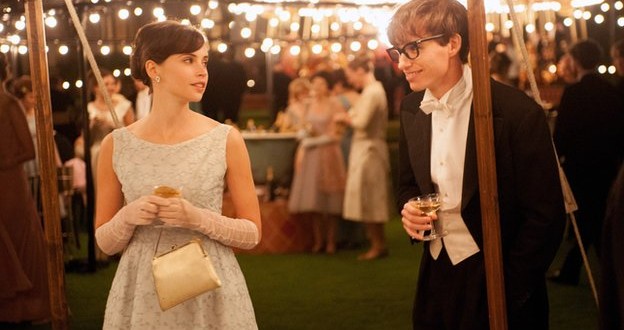 Stephen Hawking biopic The Theory of Everything has been shortlisted in the four main categories at this year’s Bafta awards, including best film.

Eddie Redmayne, who plays Professor Hawking, and Felicity Jones, as his first wife Jane Wilde, are up for best actor and best actress.

Once technical categories are counted, however, The Grand Budapest Hotel has the most nominations.

“Dom Perignon all around for guests and staff at The Grand Budapest Hotel. And a free sample of Eau de Panache too, darling.”

Watch a clip from The Grand Budapest Hotel

Superhero drama Birdman and the Theory of Everything follow, with 10 apiece, followed by Alan Turing biopic The Imitation Game, on nine.

Benedict Cumberbatch receives a best actor nod for his portrayal of Turing, while the film also gains Keira Knightley a nomination for best supporting actress.

But Mike Leigh’s critically-lauded Mr Turner was frozen out of the main categories.

The film won Timothy Spall a best actor prize at the Cannes Film Festival last year, but is only up for technical prizes, including costume design and cinematography at the Baftas.

Many had assumed British star David Oyelowo was guaranteed a nomination for his portrayal of the US civil rights leader, but the film failed to score a single nomination.

The nominees in the four main categories are:

Speaking to the BBC, actor Eddie Redmayne said the recognition for The Theory of Everything was “thrilling”.

“James Marsh our director got such an amazing group of people. It was a passion project for everyone so the fact it has been nominated for so many things is a testament to him.”

He also denied any rivalry with fellow nominee Benedict Cumberbatch.

“There is none. He’s an old friend. We’ve known each other for about 10 years now.

“He is the most magnificent actor. I’ve seen Imitation Game and he is brilliant in it.”

“I feel very lucky to be in such remarkable company. I’ve watched those performances and I feel like they’re very exciting for women in film because they are all revolutionary performances.”

Eddie Redmayne on his Bafta nomination

They will compete against Whiplash star Miles Teller, Shailene Woodley from The Fault in Our Stars and The Wolf of Wall Street’s Margot Robbie.

All the winners will be announced at the Bafta Film Awards ceremony hosted by Stephen Fry on 8 February.