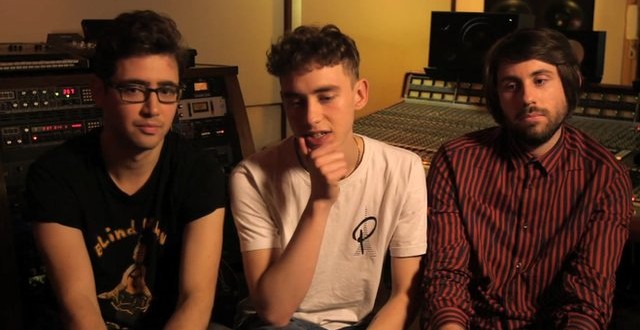 Soulful synth-pop trio Years Years have come top of the BBC Music Sound Of 2015 list, which highlights the best new artists for the year ahead.

Singer Olly Alexander said coming top of the list “means we’ve got a real shot” at making an impact.

“People are going to listen to what we’re going to do, and we’ve just got to not muck it up,” he said. “We’ve got to make the most of it and deliver.”

Years Years, whose influences vary from Stevie Wonder and Joni Mitchell to Radiohead and TLC, have won over critics with a string of well-received singles.

“Years Years have already and will continue to capture imaginations with their electronic melodies and lively on stage sets,” said DJ Huw Stephens, who announced the band’s victory on BBC Radio 1.

“They are a young band with loads of ideas and a clear vision of the music they want to make, and that will take them far this year.”

Among those who voted for the band was Mark Adams, music director of The Box Network, who said: “It’s electronic music that actually has real depth and emotion, which is an exciting combination.”

Alison Howe, producer of BBC Two’s Later… With Jools Holland, added: “This trio are making dance music that wears its heart and soul on its sleeve. Their countless electro pop anthems will fill many a festival tent next summer.”

Sound of 2014 winner Sam Smith said Years Years have “such amazing talent” and advised them to “take all that support and bring the right songs and go for it”.

Smith went on to become the only artist to sell more than a million albums in both the UK and US last year, securing six Grammy Award nominations in the process.

Years Years singer Olly Alexander has given up a promising acting career to try to make the breakthrough with his band.

He appeared on the West End stage with Dame Judi Dench and Ben Whishaw in 2013, and last year was seen in the films The Riot Club and God Help the Girl.

Alexander met his bandmates in London but they hail from different parts of the world.

Synth player Emre Turkmen born in Holland and lived in Turkey before moving to the UK at the age of 11. Bassist and keyboard player Mikey Goldsworthy is Australian, while Alexander is a Brit.

Years Years beat singer-songwriter James Bay, who has won the Brit Awards’ Critics’ Choice prize, into second place on the Sound of 2015 list.

Last year, Ella Eyre, Banks, Sampha and George Ezra joined Sam Smith in the Sound of 2014 top five, while Royal Blood, FKA Twigs, Jungle and Nick Mulvey were among the acts on the longlist.

This year’s list was compiled using recommendations from 139 tastemakers, who were asked to name their favourite new acts.

The previous winners in full: