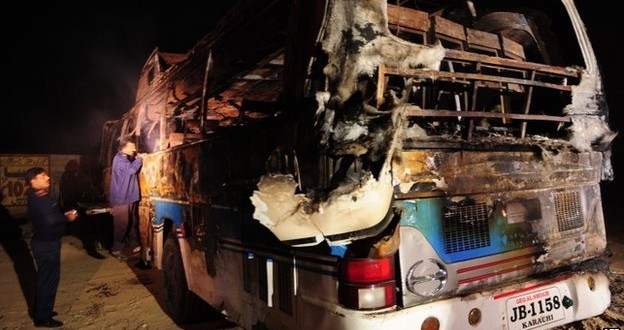 The bus burst into flames on impact with the oil tanker

At least 30 people have died and many more were injured when a bus collided with an oil tanker near the Pakistani city of Karachi, police say.

The tanker was reportedly speeding and travelling on the wrong side of the road when it hit the bus head-on. Both vehicles burst into flames.

Some passengers travelling on the roof of the bus were able to jump to safety but many of those inside were trapped.

The driver of the tanker is said to have fled the scene after the incident.

Rescuers had to search the bus for remains

The bus was travelling from Karachi to the town of Shikarpur.

Some of the victims were charred beyond recognition.

One report quoting staff at a Karachi hospital put the death toll higher, at 57.

Pakistan has a high number of fatal traffic accidents, with nearly 9,000 crashes and an average of 4,500 deaths on the road each year.

Two months ago, at least 50 people died when a bus collided head-on with a goods vehicle near the city of Khairpur, in the north of Sindh province.