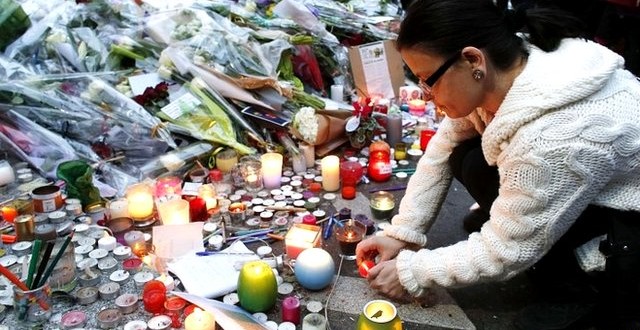 Huge crowds and some 40 world leaders are expected in Paris for a unity march in the French capital after three days of terror left saw 17 people killed.

The rally is expected to dwarf marches across France on Saturday that saw 700,000 people take to the streets.

About 2,000 police officers and 1,350 soldiers are being deployed in Paris to protect more than a million marchers.

Police are seeking accomplices of the gunmen who attacked satirical magazine Charlie Hebdo and a kosher supermarket.

Eleven people were killed at the magazine offices on Wednesday, with a policeman shot dead nearby. Four hostages died at the supermarket on Friday.

At the Elysee Palace ahead of Sunday’s march, President Francois Hollande met leaders from the Jewish community, which is still in shock after gunman Amedy Coulibaly attacked the Hyper Cacher store in eastern Paris.

He is also believed to have shot dead a policewoman on Thursday.

He died at the scene but his partner, Hayat Boumeddiene, is still wanted by police – though she is thought to have fled France last week.

Officials believe she may have entered Turkey en route to Syria.

Amid the mourning, the hunt for accomplices continues

The interior minister says France will stay on high alert in the coming weeks.

Bernard Cazeneuve will host a meeting on Sunday morning of fellow interior ministers from across Europe, including the UK’s Theresa May, to discuss the threat posed by militants.

Mr Cazeneuve promised “exceptional measures” for the massive unity march in Paris on Sunday, including positioning snipers on roofs.

The march, which will be led by relatives of the victims of last week’s attacks, will leave Place de la Republique at 15:00 local time (14:00 GMT).

Hundreds of thousands took to the streets on Saturday, with placards reading: “I am against racism”

It will offer France the chance to unite against the violence that began on Wednesday when two brothers raided the offices of the satirical magazine Charlie Hebdo.

They were eventually cornered on Friday and were shot dead by police as police moved against them and Coulibaby at the same time.

Stories have been emerging of how ordinary people caught up in the attacks defied the gunmen.

At the supermarket, one employee hid shoppers in a cold storage room, while the manager of the printworks seized by the Kouachi brothers managed to hide another employee for hours.

Meanwhile, there has been an arson attack at the offices of a German newspaper that reprinted Charlie Hebdo cartoons of the Prophet Muhammad.

No-one was hurt in the assault on the Hamburg Morning Post in the early hours of Sunday, in which rocks and a burning object were thrown through a window. Two young men have been arrested.

Relatives of the victims spoke out about the France attacks on Saturday.

The family of Ahmed Merabet, one of the police officers killed during Wednesday’s attack on the Charlie Hebdo magazine, said they were “devastated by this act of barbarity”.

Mr Merabet was “Muslim, and very proud of being a police officer and defending the values of the Republic”, his brother Malek Merabet said at a news conference.

Meanwhile, the family of gunman Amedy Coulibaly has also condemned the attacks.

In a statement, Coulibaly’s mother and sister offered “sincere condolences” to the families of the victims, and said: “We absolutely do not share these extreme ideas. We hope there will not be any confusion between these odious acts and the Muslim religion.”

Nearly a quarter of a million people held marches in France on Saturday to condemn the attacks, with large crowds gathering in Paris, Orleans, Nice, Pau, Toulouse and Nantes.

During the marches, people held banners that read “I am against racism”, “unity”, or “I am Charlie” – the latter a reference to the magazine.

Addressing a large gathering outside the kosher supermarket that was targeted, Prime Minister Manuel Valls said: “Today, we are all Charlie, we are all police officers, we are all Jews of France.”

He said he had “no doubt that millions of citizens will come to express their love of liberty, their love of fraternity” in Paris on Sunday.

Are you taking part in the rally? If you are happy to speak to the BBC, please email us at [email protected] please remember to include a contact number.