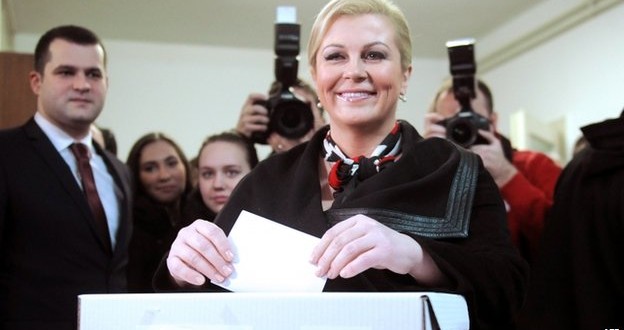 Opposition challenger Kolinda Grabar-Kitarovic has become the first female president of Croatia, winning by the narrowest of margins.

She secured more than 50% of the vote, with more than 49% for incumbent Ivo Josipovic.

Mr Josipovic has conceded defeat and congratulated his opponent.

The challenger’s win is a sign that Croatia may be shifting to the right after the centre-left coalition’s failure to end six years of downturn.

The election was seen as a key test for the main parties.

The gap between the two candidates remained at about one percentage point throughout much of the second round.

The first round of the vote was equally close.

Mr Josipovic has enjoyed widespread popularity for much of his tenure

Ms Grabar-Kitarovic, 46, is a politically conservative member of the Croatian Democratic Union which pushed the country towards independence more than 20 years ago.

Nominated by the centre-right opposition HDZ party, she is a former foreign minister and assistant to the Nato secretary general.

Mr Josipovic, a 57-year-old law expert and classical composer, was nominated by the governing coalition. He has been president since 2010.

He has been so popular for so long that initially it seemed impossible he could fail in a bid for re-election.

Croatia, which became the newest member of the European Union when it joined in July 2013, has an unemployment rate close to 20%.

The Croatian president has a say in foreign policy and is head of the army, but running the country is primarily left to the government.

Mr Josipovic proposed constitutional changes in a bid to solve the economic crisis – including increased powers for the president.

Parliamentary elections are expected to be held towards the end of 2015.