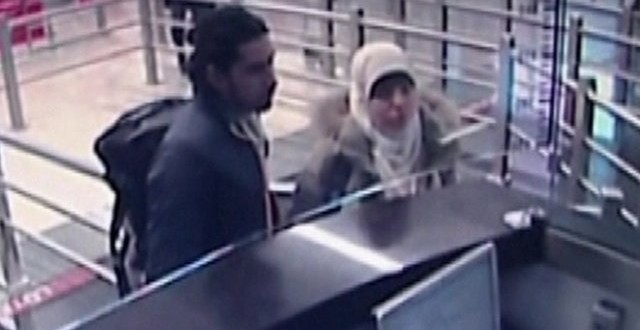 Video 'of Paris suspect' in Turkey

The video purports to show Hayat Boumeddiene passing through passport control with another man on 2 January. She is thought to now be in Syria.

French police are seeking her after Coulibaly and two other gunmen launched deadly attacks on Paris last week.

About 10,000 troops have been deployed in France following the attacks.

The violence began after brothers Said and Cherif Kouachi attacked the offices of the satirical magazine Charlie Hebdo on Wednesday, killing 12 people. Witnesses said they shouted “we have avenged the Prophet Muhammad” after the attack.

On Monday, the cover of the latest edition of the magazine, put together by surviving staff, was published in French media.

It depicted the Prophet Muhammad tearfully holding a sign reading “Je suis Charlie” (“I am Charlie”), a phrase used by the magazine’s supporters following the attacks. Above the picture were the words: “Tout est pardonne” (“All is forgiven”).

Charlie Hebdo’s lawyer, Richard Malka, has told French radio that the magazine will “cede nothing” to extremists.

The latest issue, to be released on Wednesday, will have a print run of three million copies, compared with its usual 60,000 a week.

The satirical weekly has regularly courted controversy in the past with its irreverent take on news and current affairs. It was firebombed in November 2011 a day after it carried a caricature of the Prophet Muhammad.

Hayat Boumeddiene has been identified as a suspect by French police, although she left France before the attacks.

Her partner, Coulibaly, had killed four people at a kosher supermarket in eastern Paris on Friday before police stormed the building. He is also believed to have shot dead a policewoman the day before.

Coulibaly had claimed that he co-ordinated his attack with the Kouachi brothers. All three gunmen were shot dead on Friday after police ended two separate sieges.

The Turkish foreign minister said that Hayat Boumeddiene arrived in Turkey on 2 January from Madrid, before continuing to Syria six days later.

The security footage, published by Haberturk newspaper, was released by Turkish police. It appeared to show Hayat Boumeddiene and a man at Sabiha Gokcen Airport in Istanbul.

Turkish officials told the BBC the man was Mehdi Sabri Belhouchine, a man of North African origin, and that he was not on a watch list. Officials believe he crossed into Syria with Hayat Boumeddiene.

French prosecutors said Hayat Boumeddiene had exchanged more than 500 phone calls with the wife of Cherif Kouachi in 2014.

French police said they had also found a second flat in Paris which had been used as a hide-out by Coulibaly, and contained weapons.

Turkish Prime Minister Ahmet Davutoglu said on Monday that Turkey had not been asked to deny Hayat Boumeddiene access.

“We need to receive intelligence first so we can track people. We have 7,000 people on a no-entry list and deported 2,000, including French and German citizens.”

He added: “Is it Turkey’s fault that it has borders with Syria?”

2 Jan: Flew from Madrid to Istanbul, accompanied by French citizen Mehdi Sabry Belhoucine. The pair attracted the suspicions of Turkish authorities, who put them under surveillance. They stayed at a hotel in the city for two days, where Boumeddiene is reported to have bought a mobile phone and SIM card

4 Jan: Domestic flight to Sanliurfa near Syrian border. She is reported to have made a number of calls to France from Turkey. The pair did not use their return tickets to Madrid, dated 9 January

8 Jan: Crossed into Syria. On the same day, her partner Amedy Coulibaly shoots dead a policewoman, using Boumeddiene’s car in the attack. The French authorities announce they are looking for her

10 Jan: Last recorded phone call, reportedly from the Syrian town of Tel Abyad – not far from the border

On Monday, France said it would deploy 10,000 troops to sensitive areas to boost security following the attacks.

It is the first time troops have been deployed within France on such a scale.

Defence Minister Jean-Yves Le Drian said the deployment, the first of its kind, was needed because “threats remain present”.

Interior Minister Bernard Cazaneuve announced that nearly 5,000 members of the security forces would be sent to protect France’s 717 Jewish schools.

Prime Minister Manuel Valls said synagogues would also be protected, as would mosques, following some retaliatory attacks over the Charlie Hebdo killings.

There had been more than 20 attacks on Islamic buildings and 30 threats against Muslims since Wednesday, a spokesman for the Central Council of Muslims in France said.

The four Jewish victims of the supermarket attack will be buried at the Givat Shaul cemetery in Jerusalem on Tuesday.

About 40 world leaders joined the start of the Paris march, linking arms in an act of solidarity.

The US government faced criticism after it was represented by its ambassador to France, rather than President Barack Obama or Secretary of State John Kerry.

On Monday, White House spokesman Josh Earnest admitted: “I think it’s fair to say that we should have sent someone with a higher profile to be there.”

Armed police patrolled on Monday in the Marais, a historic Jewish neighbourhood in central Paris

Last week, Mr Valls admitted there had been “clear failings” after it emerged that the three gunmen involved in the attacks had a history of extremism.

The Kouachi brothers were on UK and US terror watch lists and Coulibaly had previously been convicted for plotting to free a known militant from prison. Coulibaly met Cherif Kouachi while in jail.