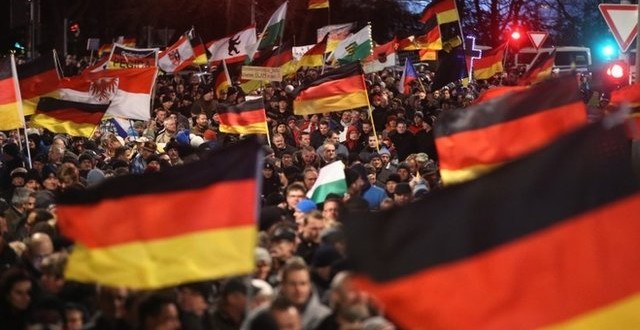 A record 25,000 people have joined an anti-Islamisation rally in Dresden, Germany, called in the wake of the Paris terror attacks.

The protesters defied calls from German politicians to stay away from the Pegida organisation’s rally.

Chancellor Angela Merkel has said she will attend a protest organised by Muslim groups in Berlin on Tuesday.

Justice Minister Heiko Maas was one of several leading politicians to urge the Pegida march organisers in Dresden not to “misuse” the deadly attacks on Charlie Hebdo magazine and a Jewish supermarket.

However, the rally in the eastern city went ahead, drawing a record 25,000.

A minute’s silence in memory of the dead was also expected to be held.

Some 25,000 attended the Pegida demonstration in Dresden

Pegida – Patriotic Europeans against the Islamisation of the West – has organised a number of Dresden rallies, and drew 18,000 a week ago.

Anti-Pegida protesters outside a synagogue in Dresden on Monday

At the scene: BBC’s Jenny Hill in Dresden

They marched in silence – at first at least. Normally Pegida’s demonstrations in Dresden are rowdy affairs but this, organisers emphasised, was a “Trauermarsch” (a mourning march) dedicated to the victims of the Paris shootings.

Pegida’s been accused of trying to capitalise on the terror attacks, and Angela Merkel warned Germans not to support them.

But tonight thousands of people ignored her, some wearing black ribbons as they marched.

Pegida officials expressed their sorrow at what happened in France. But they also took the opportunity to unveil a streamlined manifesto. A response, perhaps, to critics who point to a lack of cohesion, a difference of ideology among their supporters.

Take Karl, a pensioner who clapped me on the shoulder and smiled amiably as he pointed up at his banner: “Asylum seekers go home!”

Compare him to a man standing close by who wants Germany to stop weapons exports. Or the woman who fears that the country cannot cope with the current rate of immigration. But something unites these people – and that’s a growing dissatisfaction with – and even a distrust of – the political establishment.

In a series of interviews, Mr Maas accused the anti-Islamist group of hypocrisy.

“In Dresden people want to remember with a black ribbon the victims in Paris – those same people whom a week ago they were calling the ‘lying press’,” he said.

Interior Minister Thomas de Maiziere also criticised the organisers while Bavarian leader Horst Seehofer called on them to stop the marches for the foreseeable future.

The chancellor, who was meeting Turkish PM Ahmet Davutoglu on Monday, was set to take part in a demonstration against the French murders in Berlin planned by Muslim groups on Tuesday, her spokesman said.

“Islam is part of Germany,” said Mrs Merkel on Monday. “I am the chancellor of all Germans.”

The growth of the anti-Islamisation marches over recent weeks has worried Germany’s political leadership.

Tensions were further raised at the weekend when arsonists attacked a Hamburg newspaper that republished controversial cartoons of the Prophet Muhammad which had originally been printed by Charlie Hebdo in 2006.

The men who attacked Charlie Hebdo last week were said to have shouted out that they had avenged the Prophet for the cartoons.

Are you in the area? You can email [email protected] with your experience.