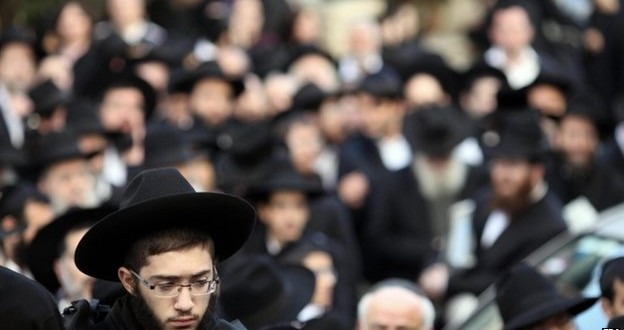 The funerals are getting under way in Jerusalem of four Jewish victims killed during last week’s attacks in Paris.

The four men were shot dead at a kosher supermarket in three days of terror which began with a deadly attack on the satirical magazine Charlie Hebdo.

The funeral ceremony will include an address by the Israeli prime minister.

This week’s edition of Charlie Hebdo is to show a cartoon depicting the Prophet Muhammad – which is said to have prompted the attack by Islamist gunmen.

The cartoon shows the Prophet holding a “Je suis Charlie” sign and the words “All is forgiven”.

It has been previewed in numerous other publications internationally.

A total of 17 people were killed in three days of terror attacks in the French capital last week.

The four Jewish victims of the supermarket attack – Yoav Hattab, Philippe Braham, Yohan Cohen and Francois-Michel Saada – will be buried at the Givat Shaul cemetery in Jerusalem.

Their bodies arrived before dawn on a flight from France for the ceremony.

The victims’ relatives will recite a traditional prayer and read eulogies. The office of Israeli Prime Minister Benjamin Netanyahu said the families had asked for the burials to take place in Israel.

Mr Netanyahu and Israeli President Reuven Rivlin will speak at the funerals – a measure of the connection Israel feels with events in Paris, the BBC’s Kevin Connolly in Jerusalem reports.

Their challenge is to find words to address the sense in Israel that the dead were victims of a mood of anti-semitism as well as an act of Islamist extremism, our correspondent adds.

The latest cover of Charlie Hebdo has been published in advance by French media. Outside France, the Washington Post, Germany’s Frankfurter Allgemeine, Corriere della Sera in Italy and the UK’s Guardian are among publications to show the cartoon.

The slogan in French “Je suis Charlie” (“I am Charlie”) was widely used following the attack on the magazine, as people sought to show their support.

Three million copies of Wednesday’s edition are being printed. Normally only 60,000 are sold each week.

Charlie Hebdo’s lawyer Richard Malka told France Info radio: “We will not give in. The spirit of ‘I am Charlie’ means the right to blaspheme.”

Survivors of the massacre have been working on the magazine from the offices of the French daily newspaper Liberation.

Five of Charlie Hebdo’s cartoonists – including the editor – were killed in the attack.

The new edition will be created “only by people from Charlie Hebdo”, its financial director, Eric Portheault, told AFP news agency.

Contributions from other cartoonists were declined.

The three days of violence in Paris began after brothers Said and Cherif Kouachi attacked the magazine’s office. Witnesses said they shouted “we have avenged the Prophet Muhammad” after the shootings.

The brothers were later killed by French security services after a stand-off north of Paris.

Separately, Amedy Coulibaly – whom investigators have linked to the brothers – had killed four people at a kosher supermarket in eastern Paris on Friday before police stormed the building.

Coulibaly is also believed to have shot dead a policewoman the day before.

His partner Hayat Boumeddiene is now believed to be in Syria. She has been identified as a suspect by French police, although she left France before the attacks.

Six people suspected of belonging to a cell behind the Paris attacks are still thought to be at large, French police have told AP news agency.

It quotes police as saying they are searching the Paris region for a Mini Cooper car registered to Boumeddiene.

Newly-released CCTV footage appears to show her arriving at an Istanbul airport in Turkey on 2 January.

About 10,000 troops are being deployed across France after the attacks, and a huge unity rally was held in Paris on Sunday.