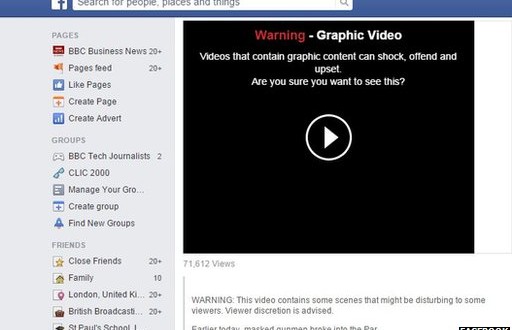 Facebook has begun placing warnings over videos posted to its site, stating their contents might “shock, offend and upset” if viewed.

The alerts prevent the videos from automatically playing in feeds unless they are clicked, unlike other clips.

The site is also preventing graphic videos and photos from being shown to any user who has identified themself as being under 18 years old.

It follows pressure for the move from its own safety advisers.

But one psychologist said the measure still did not do enough to protect young, vulnerable members of the social network.

Among the first posts to be affected are uploaded files containing video footage of policeman Ahmed Merabet being shot dead in Paris by a terrorist involved in last week’s Charlie Hebdo attacks.

Facebook has faced repeated criticism over recent years for allowing violent and graphic images that it deems to be of public interest or concern to remain on its pages.

The US firm’s guidelines ban material “shared for sadistic pleasure or to celebrate or glorify violence”.

However, it allows news reports and other documentary images depicting beheadings and other types of murder to remain online despite the potential for distress.

The firm permits children as young as 13 years old to be members. But some even younger children circumvent this age limit by providing false details when joining up.

Stephen Balkam, the charity’s chief executive, told the BBC he wanted cover pages to be placed over graphic material to prevent people from seeing distressing images without warning, and an age-gate system implemented to make it harder for under-18s to find the material.

Facebook has now confirmed it began rolling out such a scheme in December. It applies to graphic material reported to the firm by its users that is judged to have been posted in an irresponsible manner.

“We also ask that people warn their audience about what they are about to see if it includes graphic violence.

“In instances when people report graphic content to us that should include warnings or is not appropriate for people under the age of 18, we may add a warning for adults and prevent young people from viewing the content.”

The spokeswoman added that the firm’s engineers were still looking to further improve the scheme.

She said this might include adding warnings to relevant YouTube videos, which is not currently possible, as well as placing alerts over distressing photographs that were still available to adults.

Mr Balkam said he was “delighted” by Facebook’s move.

“I also think that it has walked a very fine line between protection of users and protection of free expression, and I think it has got it just about right,” he added.

Facebook had briefly experimented with adding a more basic form of warning sign to clips of decapitations in October 2013 after Prime Minister David Cameron said: “It’s irresponsible of Facebook to post beheading videos, especially without a warning.”

News of the social network’s latest move was welcomed by Childnet International, a London-based charity that is another member of Facebook’s safety advisory panel.

“It’s a good step to try and help protect people from this content, and we are glad that there is 18 age-gating,” said the organisation’s chief executive Will Gardner.

“There always has to be the recognition that people don’t always sign up with their accurate age, and we have to be aware of that. But it’s important that there are steps taken to protect people from seeing harmful and disturbing content that they don’t want to see.”

However, Dr Arthur Cassidy – a psychologist who runs a branch of the Yellow Ribbon Program suicide-prevention charity – said Facebook should implement an outright ban on clips and pictures of extreme violence.

He noted that large numbers of children used the service and said it was likely that many would try to work around the new restrictions.

“At the end of the day warning messages will not prevent young people from seeing upsetting and psychologically damaging material,” he said.

“We know if we say, ‘Do not do it,’ that they will still do it – they will want to look and view material, irrespective of how grotesque it is.