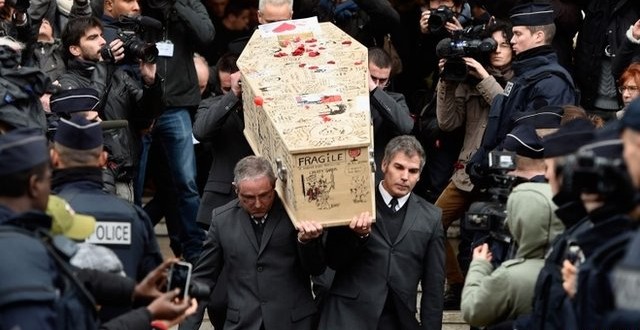 Funerals have been held for four people killed in last week’s attack in Paris on satirical magazine Charlie Hebdo by militant Islamists.

Friends and family paid last respects to cartoonists Bernard Verlhac, known as Tignous, and Georges Wolinski, as well as a columnist and a policeman.

Pope Francis condemned the attacks but said there were limits to freedom of expression and people’s faith should not be insulted.

Seventeen people died in the attacks.

Eight magazine staff, a visitor to the magazine and a caretaker died, as well as three police officers and four people at a Jewish supermarket.

Al-Qaeda said it had directed the Charlie Hebdo attack.

A private funeral service was held for Tignous, 57, in the suburb of Montreuil, ahead of his burial in Pere Lachaise, Paris’ best known resting place for writers, artists and composers.

A ceremony was held at Pere Lachaise for Wolinski, who was to be cremated.

Tignous’ photo was displayed at his funeral

One of those being buried was Franck Brinsolaro, a police officer assigned to protect Charlie Hebdo’s editor

Crowds in Montreuil applauded Tignous’ coffin as it arrived for the ceremony at Montreuil town hall covered in drawings and messages from well-wishers.

In a tribute at the ceremony, Tignous’ colleague Corinne Rey described him as the “king of jokes”.

“Our magazine will live, it will be a different magazine,” she said. “You were never afraid, my Titi and be assured, we won’t be afraid either.”

Also speaking at Montreuil, Justice Minister Christine Taubira said the dead cartoonists were the “guardian angels, those who watch out to make sure democracy was working” and the “face of France, obnoxiously assassinated.”

“You were dreaming of being free, we will continue your dream.”

At Wolinski’s funeral, his daughter Elsa said his ideals would live on.

“I’m beginning to realise that he is gone,” she said. “But as I said before, they’ve killed a man and not his ideas. So here we are. We stand here and will continue to defend the principles of Charlie Hebdo.”

Earlier President Francois Hollande vowed to protect Muslims who, he said, were the main victims of fanaticism, along with people of other religions.

President Hollande: “Muslims are the first victims of fanaticism, fundamentalism and intolerance”

Speaking at the Arab World Institute, he said anti-Muslim and anti-Semitic acts should be condemned and punished.

Meanwhile Pope Francis condemned the attacks, saying it was an “aberration” to kill in the name of God, but said the faith of others should not be insulted and there were limits to freedom of expression.

“If my good friend Doctor Gasparri [who organises the Pope’s trips] speaks badly of my mother, he can expect to get punched,” he said, throwing a pretend punch at the doctor, who was standing beside him.

In a separate development, the government announced that a Malian employee of the attacked Jewish supermarket would be given French citizenship.

Some 300,000 people signed an online petition calling for the move after the employee, Lassana Bathily, hid several customers from the gunman in a cold store.

France has deployed thousands of troops and police to boost security in the wake of last week’s attacks. There have been retaliatory attacks against Muslim sites around France.

Charlie Hebdo published a new edition on Wednesday, with an image on the cover showing the Prophet Muhammad weeping while holding a sign saying “I am Charlie”, and below the headline “All is forgiven”.

But some Muslims were angered by the edition and Turkish Prime Minister Ahmet Davutoglu condemned it on Thursday as an “open provocation”.

In Pakistan on Thursday, lawmakers unanimously approved a resolution condemning the publication of the images, state-run TV reported. Later several hundred demonstrators from a religious party called for cartoonists who drew pictures of the Prophet Muhammad to be hanged.

US Secretary of State John Kerry is due to meet Mr Hollande in the French capital on Friday.

Ahead of the trip, he said: “My visit to France is basically to share a big hug with Paris.”