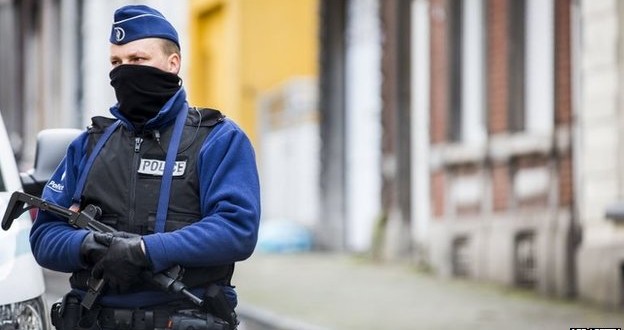 Europe on high alert over terrorism

There have been anti-terror raids in Belgium, France and Germany

More than 20 people have been arrested in Belgium, France and Germany and Belgian has joined France in deploying troops alongside police.

Security has been tightened in several countries after last week’s attacks in Paris left 17 people dead.

There are increased concerns about the return of young Europeans who have gone to fight with Middle East militants.

In Belgium, five people were charged on Friday with “participating in the activities of a terrorist group” following a series of raids that began on Thursday evening and left two suspects dead.

Guns, munitions and explosives, as well as police uniforms and a large amount of money, were all seized by police overnight.

Eric Van Der Sypt, an official at the prosecutors’ office, told AFP that: “The investigation… has shown that these people had the intention to kill several policemen in the street and at police commissariats [police stations].”

Thirteen people were arrested in total but only five would be prosecuted, he said. Belgium would also seek the extradition of two suspects held in France.

They include making travelling abroad for terrorist activities a crime and expanding the cases where Belgian citizenship can be revoked for dual nationals who are thought to pose a terror risk.

No link has been established between the terrorist plot in Belgium and last week’s attacks in Paris.

But French Prime Minister Manuel Valls said on Friday that, despite this, both countries face the same threats.

“The link that exists is the will to attack our values,” he said.

Twelve suspects are being held by police in the Paris region over last week’s attacks in the French capital that killed 17 people.

Police carried out raids in five towns, iTele reported. Those arrested are now being questioned about “possible logistical support”, such as weapons or vehicles, they could have given the three gunmen, according to police.

France remains on its highest terrorism alert level and authorities have said that some 120,000 police and soldiers have been mobilised across France.

In a separate incident on Friday, authorities shut down and evacuated the Gare de l’Est train station after a bomb scare.

Security forces have been mobilised across France

The incidents in France and Belgium have had a wider impact on their European neighbours.

Spain has launched an investigation into the visit of one of the Paris gunmen, Amedy Coulibaly, to Madrid just days before the attacks in Paris.

One of the men was suspected of leading an extremist group of Turkish and Russian nationals.

Police said that the group was preparing a serious act of violence in Syria but that there was “no indication” that the group had been planning attacks inside Germany.

In the UK, police have been warned that a terror attack against them is highly likely.

The head of Europol, Rob Wainwright, told the BBC that the need for tightened security across Europe highlighted the complex nature of the terrorist threat in the region.

He said it was hard for police to identify plans because suspects were “working in a self-radicalised way very often, not necessarily under any command and control structure”.