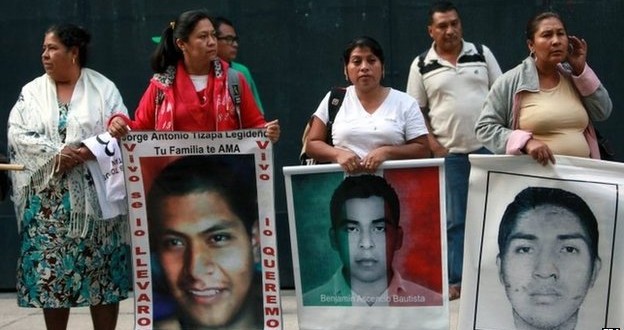 Police in Mexico have arrested a member of a criminal gang accused of killing 43 students in Iguala in September.

They say the students were detained by police after a protest and handed over to the gang.

The students’ disappearance sparked weeks of protests across Mexico against corruption and violence.

Felipe Rodriguez – known as “El Cepillo” or “The Brush” – was arrested on Thursday night in the city of Jiutepec, some 90km (55 miles) south of Mexico City.

Attorney General Jesus Murillo Karam identified him in November as the gang member who ordered the bodies and clothes of the victims to be burned in a nearby rubbish dump and thrown into a local stream.

“His intent was to destroy all evidence of the murders,” said Mr Murillo Karam.

More than 90 people, most of them local police in south-western Guerrero State, have been detained so far in connection with the case.

The students were enrolled at the Ayotzinapa teachers’ training college

Members of the gang confessed to killing the 43 and burned their bodies after they were told the students belonged to a rival gang.

But the remains of only one student, Alexander Mora, have been identified so far, after being taken for DNA tests at a forensic centre in Austria.

He was in his first year of studies at the rural teacher training college in Ayotzinapa, a college with a tradition of left-wing political activism.

Alexander Mora was part of a group of students who travelled to nearby Iguala on 26 September and, as part of a protest, commandeered a number of buses.

On their way back to their college the students were intercepted by police allegedly on the orders of the local mayor, who wanted to prevent them from disrupting a speech his wife was giving at a public event that evening.

Relatives of the 42 missing students say they will not give up hope of finding them alive until forensic evidence proves they are dead.

They want the authorities to open an investigation into the role of the Mexican army in the disappearance.