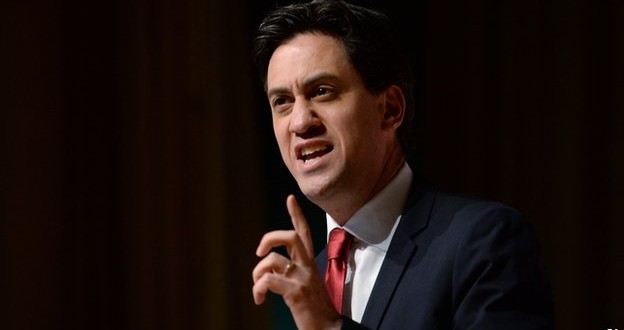 Ed Miliband said people would be “choking on their cornflakes” after the PM urged firms to use windfalls from cheaper oil to fund pay rises.

In a speech in London, the Labour leader accused David Cameron of trying to “wipe away five years of failure” on living standards.

On Friday, Mr Cameron had said businesses should pass on the benefits of falling oil prices to employees.

The prime minister also called on companies to pay the living wage.

But Mr Miliband, speaking at left-of-centre think tank, the Fabian Society, said the Conservatives had previously “shown a tin ear” to the reality faced by thousands.

You can’t magic away people being £1,600 a year worse off by trying to take credit for falling oil prices”

He said: “They have denied the cost of living crisis. They have been woefully out of touch with the daily struggles of families.

“They have rubbished the idea that people are worse off. Even this week, George Osborne was saying we were set under him to be ‘the richest country in the world’, and that his economic victory is complete.

“But we wake up this morning to hear that the prime minister thinks ‘Britain needs a pay rise’.

“People across the country will have been choking on their cornflakes.”

Mr Cameron, speaking on a visit to the US, said he wanted “companies’ success passed through in terms of wage increases”.

He also said businesses which could afford to pay the living wage – higher than the national minimum wage of £6.50 an hour – should do so.

He said: “It’s good and helps to reduce the welfare bill.”

Mr Cameron spoke to reporters during his visit to Washington

The price of a barrel of oil has fallen to less than $50 in recent months – less than half its value last summer – amid falling demand and increased US shale field production.

Figures show record earnings in the manufacturing and service sectors as firms benefit from cheaper oil.

Mr Miliband told the conference: “Five years of denial, complacency and failure on living standards, and less than four months before an election, he claims to have woken up to the problem.

“You can’t wipe out five years of failure on living standards with pre-election pleading.

“You can’t magic away people being £1,600 a year worse off by trying to take credit for falling oil prices.”

Mr Miliband pledged to “balance the books and cut the deficit every year but not by shredding our public services”.

He added: “Instead, we will make common sense reductions in spending, with departmental spending falling outside protected areas.”

To “make sure everyone pays their fair share”, he said a Labour government would repeal what he labelled “tax cuts for millionaires” and introduce a mansion tax on properties worth more than £2m.

Mr Miliband also described the Conservative leader as “running from debates” because “he knows he has failed”.

He joked: “Why did the chicken cross the road? To avoid TV election debates.”

The prime minister has said he won’t take part in the debates ahead of May’s general election unless the Green Party is also included.

Mr Miliband said of the PM: “He is neither proud of his record nor confident of his future.”

Conservative party chairman Grant Shapps said: “Ed Miliband is saying that Labour would put up taxes, borrow forever and burden our children with more debt than they could ever hope to repay.

“That’s why Ed Miliband is simply not up to the job and hardworking taxpayers would pay dearly as a result.”

Liberal Democrat Chief Secretary to the Treasury Danny Alexander said: “Labour lack all credibility. People will not forget that Miliband and Balls were at the heart of the last Labour government that crashed the economy.”

He added that “the Liberal Democrats in government have delivered a strong economic recovery” and would “finish the job of balancing the books”.