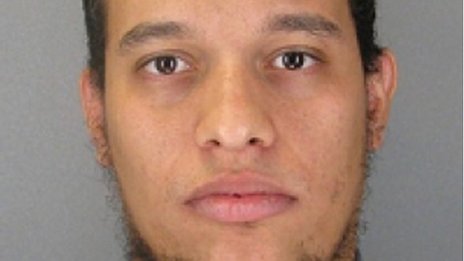 Said Kouachi was killed by police on 9 January

One of the brothers who launched a deadly attack against French satirical magazine Charlie Hebdo has been buried in an unmarked grave.

Said Kouachi was buried secretly late on Friday in the eastern city of Reims, where he had lived before the attack.

The mayor of Reims said he had opposed the burial, fearing a grave could become a shrine, but had been forced to accept it by law.

Attacks in Paris killed 17 people last week, 12 of them at Charlie Hebdo.

On 9 January, two days after attacking the magazine, Said Kouachi and his younger brother Cherif were killed by police at an industrial estate north of Paris.

Cherif Kouachi is expected to be buried in his hometown of Gennevilliers, outside Paris.

There has been no announcement on plans for burying Amedy Coulibaly, who killed four people at a Jewish supermarket in Paris on 9 January and is suspected of killing a policewoman in the French capital a day earlier.

Earlier in the week, Reims mayor Arnaud Robinet said he would “categorically refuse” a family request for Said Kouachi to be buried in the city.

He said he did not want “a tomb that could become a shrine for people to gather around or a pilgrimage site for fanatics”.

But on Saturday he said he had been forced by the government to accept the burial. “He was buried last night, in the most discreet, anonymous way possible,” he told French TV.

Like other French cities, Reims saw large crowds for a unity march after the attacks

The city said in a statement: “Given the risk of disturbance of the peace and in order to quickly turn the page of this tragic episode, it was decided to do the burial quickly.”

A lawyer for Said Kouachi’s widow said she had not attended the burial for fear that journalists would follow her and the location of the grave would be discovered.

Touring a market in Tulle on Saturday, French President Francois Hollande said the nation had “come through the ordeal with a great deal of dignity and efficiency”.

“We are of course aware that there are still threats,” he said, “but life has to go on and we even need to emerge stronger”.

“That’s the best response we can give.”

Almost 15,000 extra police and troops have been mobilised to boost security across France since the attacks.

Soldiers have also been sent onto the streets in neighbouring Belgium, where officials said they had foiled a possible attack against the police when they shot dead two suspects on Thursday in the eastern city of Verviers.

Some 150 soldiers were deployed in Brussels and Antwerp on Saturday, a number that is expected to double over the coming week.

Meanwhile, there have been protests in several countries against a cartoon in this week’s edition of Charlie Hebdo depicting the Prophet Muhammad.

In Niger, churches were set on fire in the capital, Niamey, a day after at least four people were killed in the second city of Zinder.

Seven million copies of the edition are being printed in view of extraordinary demand, distributors announced on Saturday. The magazine’s print run before the attack was 60,000.

Thousands of troops have been deployed across France to boost security