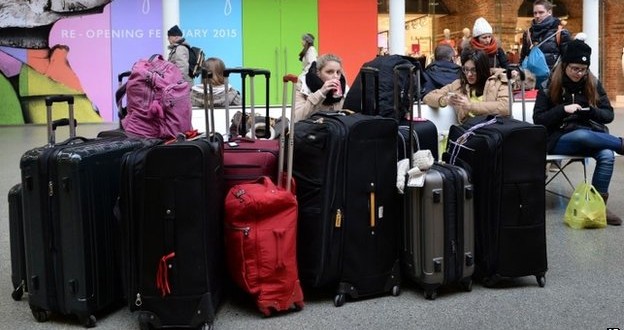 Eleven Eurostar trains have been cancelled on Sunday, amid continuing delays following Saturday’s Channel Tunnel closure due to a lorry fire.

Six Eurostar services from London were cancelled, as well as two from Paris and three from Brussels, after an unrelated power supply problem.

Rail services resumed on Sunday morning – but passengers have been warned there could be further delays on Monday.

About 12,000 passengers were affected when the tunnel was closed on Saturday.

The fire was located in the route’s north tunnel, which remained closed during Sunday.

Train operator Eurostar said it planned to run a “full service” on Monday, but warned trains could be delayed by up to 30 minutes.

It said Eurotunnel – which manages and operates the Channel Tunnel – was carrying out engineering works overnight and would put more sections of the north tunnel back into service on Monday.

Meanwhile, Eurotunnel said the north tunnel was not anticipated to be back in full operation until Tuesday.

“We’re optimistic, however, that we will regain use of part of this tunnel and will operate a more regular timetable than we have today,” it said.

Eurostar passenger trains had started moving through the tunnel again at about 11:30 GMT, but at a reduced speed as only the south tunnel was open.

However, there were fresh problems when a power supply fault – unrelated to Saturday’s lorry fire – meant the temporary closure again of the south tunnel.

On Sunday evening, Eurotunnel – which operates car and lorry services – tweeted there was still a one-hour queue to check-in and a three-hour wait to board shuttles for France.

The delay for Eurotunnel passengers heading from France to the UK was four-and-a-half hours, with some customers waiting up to two hours to check in at Calais, Eurotunnel added.

Professor Urfan Khaliq: “Almost 24 hours on I’m stuck in exactly the same place as I was yesterday”

Eurotunnel’s services started running again in the early hours of Sunday morning after “residue smoke” was cleared from a tunnel.

The company said it had expected to operate a reduced Le Shuttle timetable, with two departures every two hours from both the UK and France.

Kim Notman, who was at the Eurotunnel terminal in Calais, told the BBC: “I was loaded on to the train at 09:30 GMT with my car and have now been stuck on the train for the last three hours.

“The doors to the train have now been opened because people were getting so agitated.”

Professor Urfan Khaliq, who was travelling from Paris to London, said: “We’ve been here around, I guess, nearly three hours now. They’ve offered free cashew nuts and water to anyone who wants it.

“People are just sitting here really rather stoically and trying to get on.”

BBC News correspondent Andy Moore said an extra Eurostar train from London to Paris had been laid on, with 800 seats available, in an attempt to ease the queues.

Despite the company organising re-bookings, accommodation and refunds, it could be Monday before the backlog was cleared, he added.

Eurostar – which operates passenger services between Paris, London and Brussels – said 26 of its trains were cancelled on Saturday afternoon, affecting at least 12,000 passengers, following the fire.

Some services have resumed – but passengers still faced long delays

The alarm was raised when two CO2 detectors were triggered at 11:25 GMT on Saturday at the French end of the north tunnel.

Eurotunnel said a load on a lorry on board one of its trains, en route from the UK to France, had been “smouldering”.

Eurotunnel said passengers had been safely evacuated from trains in the tunnel, and the fire “was quickly brought under control” by French emergency services.

Firefighters examined the site and a Eurotunnel spokesman said it did not look like there was any significant damage.

At St Pancras station and in Paris there were long queues of passengers after services were cancelled. At Folkestone, lines of lorries built up near the Eurotunnel entrance.

Were you due to travel by Eurostar this weekend? Has your journey been disrupted? You can email [email protected] with your experience.