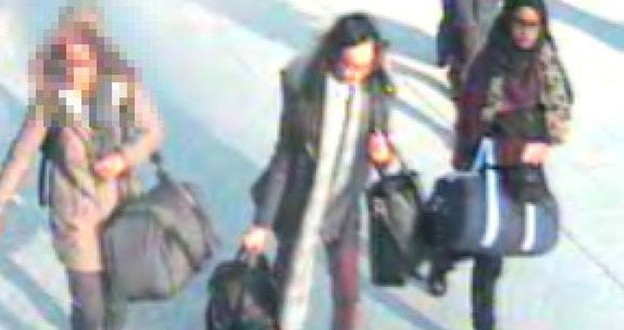 Three east London schoolgirls have flown to Turkey and there are fears they may cross the Syrian border and join the Islamic State terrorist group.

Shamima Begum, 15, Kadiza Sultana, 16, and an unnamed 15-year-old, pupils at Bethnal Green Academy, flew from Gatwick on Tuesday, during half-term.

Commander Richard Walton, of the Metropolitan Police, said he feared they were “extremely vulnerable”.

The trio are friends with a fourth girl who travelled to Syria in December.

At the time the three girls were interviewed as her friends, police said.

Cdr Walton said the teenagers’ families were “devastated” but there was a “good chance” the girls were still in Turkey.

Cmdr Richard Walton: “The girls will be in grave danger in Syria”

He hoped a police appeal, via social media, would persuade them not to enter Syria.

The girls were last seen at their homes on Tuesday morning when they gave their families “plausible reasons” to be out for the day, police said.

They boarded a Turkish Airlines flight, which landed in Turkey on Tuesday evening.

The third girl is not being named at the request of her family.

Shamima is possibly travelling under the name of her 17-year-old sister Aklima Begum, police said.

Cdr Walton said he hoped the trio would “hear our concerns for their safety and have the courage to return now, back to their families who are so worried about them.”

He said the force was becoming “increasingly concerned” about a growing trend of young girls showing an interest in joining Islamic State.

“The choice of returning home from Syria is often taken away from those under the control of Islamic State, leaving their families in the UK devastated and with very few options to secure their safe return,” he said.

“If we are able to locate these girls whilst they are still in Turkey, we have a good possibility of being able to bring them home to their families.”

Kadiza Sultana, aged 16, is the oldest of the trio, who are all in the same school year

Police have issued a description of the three girls:

Shamima Begum, 15, could be travelling under the name of Aklima Begum, police said

Salman Farsi, a spokesman for the East London Mosque, said he thought the girls had been “misled”.

A fellow pupil at Bethnal Green Academy, identified only as Sadek, said what happened was “really sad” and urged the trio to return.

BBC security correspondent Gordon Corera said ambassador Thomas Krajeski, senior adviser for foreign fighters at the US state department, said that more than 20,000 people have gone to Iraq and Syria from more than 100 countries.

British officials have said that this includes at least 600 people from the UK.

Our correspondent added Turkey has long been the primary entry point for those heading to Iraq and Syria.

CCTV captured the girls passing through security at Gatwick Airport

Dr Erin Saltman, from the Institute for Strategic Dialogue, which offers independent expertise in counter-terrorism, said IS propaganda targets young women specifically with the promise of being part of a humanitarian movement.

She said: “They are the wives and mothers of the future jihadists so quite a lot of dedication and time has been put into trying to allure these younger women to come and join in these efforts.

“They are very much restricted to the house and home for the most part. There is strict sharia law in the region.”

BBC home affairs correspondent Daniel Sandford said it was “absolutely extraordinary” that four girls from the same year at the same school had travelled to Syria, with the apparent aim of joining IS.

He said “very difficult questions” were being asked about how friends, family and the police had not managed to dissuade the three girls from going to Syria when their best friend had travelled to the country in December.

Home Secretary Theresa May said it was important “to look at the whole question of the ideology that is driving these actions” and the government was working on extremism strategy.

But shadow home secretary Yvette Cooper said the idea of the schoolgirls travelling to Syria was “very disturbing” and showed more action was needed to counteract extremist recruitment messages.

A spokeswoman for Tower Hamlets Council said it fully supported the appeal issued by the police.

A Turkish Airlines official told the BBC the airline is only responsible for checking that visas are valid for passengers before check-in and boarding flights and that all other security issues before flight are “the responsibility of the official airport authorities”.

Those with information can call the free Anti-Terrorist Hotline number on 0800 789 321.