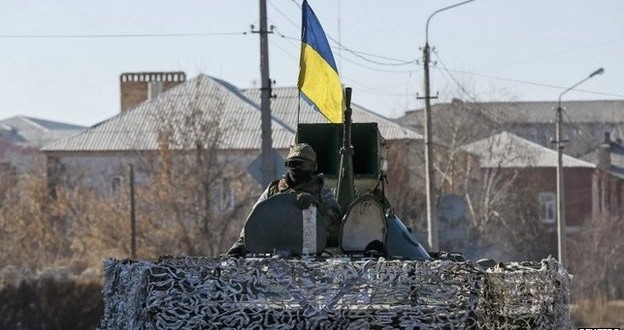 US to consider Russia sanctions

Washington is considering “serious sanctions” against Russia following the recent events in the eastern Ukraine conflict, US Secretary of State John Kerry has said.

During a visit to London, Mr Kerry said Mr Obama would make a decision on the options before him in the coming days.

He accused Moscow of “craven behaviour” in its support for the rebels, undermining a ceasefire.

But a Kremlin spokesman said sanctions would not help solve Ukraine’s crisis.

The ceasefire, agreed this month in Minsk, has often seemed near collapse.

However, a prisoner exchange has been carried out on the front line – the first stage of one of the key points of the deal.

Ukrainian President Petro Poroshenko tweeted that 139 Ukrainian troops had been freed. Media reports say 52 rebels were exchanged for them.

Ukrainian officials said one more soldier would be freed in the coming days.

From the centre of Donetsk, it’s still possible to hear the distant rumble of artillery and rockets. The area around the devastated airport remains, as it has been for months, a flashpoint.

Reports from an area just to the east of Mariupol suggest that shelling continues there too.

But the Organization for Security and Cooperation in Europe, which has monitors on the ground, says it’s seeing signs of progress elsewhere.

“Russia has engaged in an absolutely brazen and cynical process over these last days,” he said.

“We’re not going to sit there and be part of this kind of extraordinarily craven behaviour at the expense of the sovereignty and integrity of a nation.”

At a news conference later, he said he was confident additional steps would be taken.

“In the next few days I anticipate that President Obama will evaluate the choices that are in front of him and will make his decision,” he said.

“If this failure continues, make no mistake, there will be further consequences including consequences that will place added strains on Russia’s already troubled economy.”

US Secretary of State John Kerry: “We’re not going to play this game”

Ukraine and rebel forces accuse each other of multiple breaches of the truce, and there were reports of violations around Donetsk and the port city of Mariupol on Saturday.

Meanwhile an adviser to Mr Poroshenko, Yuri Biriukov, said the Ukrainian death toll in last week’s battle for the key town of Debaltseve was possibly 179, with 81 missing – a much higher figure than previously announced.

The Ukrainian authorities are exhibiting weapons and equipment, apparently captured from the rebels, in the capital Kiev

The rebels took the strategic transport hub in spite of the ceasefire signed on 12 February, arguing the truce did not apply to the flashpoint town, forcing government troops to retreat.

Nearly 5,700 people have died since the fighting erupted last April and some 1.5 million people have fled their homes, according to the UN.

The Ukrainian government, Western leaders and Nato say there is clear evidence that Russia is helping the rebels in eastern Ukraine with heavy weapons and soldiers. Independent experts echo that accusation. Moscow denies it, insisting that any Russians serving with the rebels are “volunteers”.

Reacting to Mr Kerry’s comments, Kremlin spokesman Dmitry Peskov urged the US and Europe to support the implementation of the Minsk agreements.

“The obsession to make somebody ‘pay a price’ – as they like saying in Washington – absolutely does not contribute to settling the situation in the southeast of Ukraine,” he told Russia’s Ekho Moskvy radio.

Mr Kerry’s remarks came after a bipartisan group of US senators wrote to him calling for a tightening of sanctions and the provision of defensive weapons to the Ukrainian government.

Footage shows hundreds of people marching in Moscow, with banners bearing the slogan We Won’t Forget!, referring to Ukraine’s uprising

Mr Kerry described as “unacceptable” the situation around the south-eastern port city of Mariupol, where rebels were accused of shelling government forces and building up equipment and troop numbers.

The Ukrainian government fears that rebels will attempt to capture the city to provide a corridor to Crimea, a Ukrainian territory annexed by Russia last year.

The continued fighting comes as Ukraine marked a year since the downfall of pro-Russian President Viktor Yanukovych, following mass protests in central Kiev.

A rally took place in Moscow on Saturday to condemn the ousting, which many Russians regard as a coup.

Police estimated that about 35,000 people in total took part.

The BBC’s Sarah Rainsford, at the march, says many people at the march blame America and Europe for engineering regime change in Ukraine.

Are you in Ukraine and affected by the recent unrest? You can share your experiences by emailing [email protected]. If you would be happy to speak to a BBC journalist please include a contact telephone number.