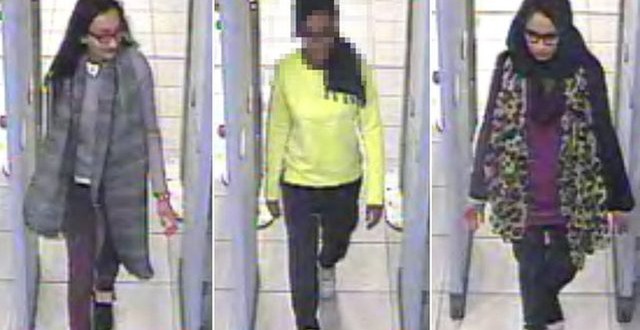 Relatives of the three missing London girls believed to be heading to Syria have pleaded for them to come home.

Shamima Begum and Amira Abase, both 15, and Kadiza Sultana, 16, travelled to Turkey on Tuesday. It is feared they may be planning to join Islamic State extremists in Syria.

Shamima’s family said they understood she wanted to help those suffering but said Syria was “a dangerous place”.

Meanwhile the family of a Glasgow woman who travelled to Syria in 2013, who reportedly contacted at least one of the girls on social media, said they were “full of horror and anger” that their daughter may have helped recruit the girls.

In a statement released through their lawyer, the family of Aqsa Mahmood told her: “You are a disgrace to your family and the people of Scotland, your actions are a perverted and evil distortion of Islam.”

The three London girls, who all attended Bethnal Green Academy in Tower Hamlets, flew from Gatwick to Turkey on Tuesday after telling their parents they were going out for the day.

Police said the girls had been interviewed by officers after another girl from their school went to Syria in December, but nothing had indicated they were at risk and their disappearance had come as a great surprise.

In a statement, Shamima’s family said: “We miss you terribly and are extremely worried about you.

“Syria is a dangerous place and we don’t want you to go there. Get in touch with the police and they will help to bring you home.

From left: Kadiza Sultana, Amira Abase and Shamima Begum know a girl who went to Syria in December

Police have issued a description of the three girls:

“We understand that you have strong feelings and want to help those you believe are suffering in Syria.

“You can help from home, you don’t have to put yourself in danger. Please don’t cross the border.”

Kadiza’s family said: “In your absence, we, as a family, are feeling completely distressed and cannot make sense of why you left home.

“Due to the speculation that you may be travelling towards Syria, we are extremely worried about your safety.”

The family said they were praying the girls would make contact.

“We all love you dearly and the last four days have been a complete nightmare not knowing where you are and how you are keeping,” they added.

“We would like to emphasise that we are not angry with you and you have not done anything wrong. We just want you all to return home, safe and sound.”

Amira’s family issued a statement pleading with her to come home “as soon as possible”.

“You are strong, smart, beautiful and we are hoping you will make the right decision,” they said.

“We miss you more that you can imagine. We are worried and we want you to think about what you have left behind.

“You had a bright future, so please return home.”

A friend who went to the same school as the girls, Atlanta Broadbent, told ITV News the girls had been “determined in what they want to do”.

The 16-year-old said: “You couldn’t argue with what they were saying.

“They were that smart they could just make something up on the spot. They were just really hard working, I wouldn’t think something like this would happen.”

Earlier, David Cameron said the fight against Islamist extremist terror was “not just one that we can wage by the police and border control”.

“It needs every school, every university, every college, every community to recognise they have a role to play.

“We all have a role to play in stopping people from having their minds poisoned by this appalling death cult.”

Commons Home Affairs Committee chairman Keith Vaz said exit checks must be “more robust in the future” and there needed to be “much closer co-operation” with Turkey in tackling the problem of people travelling through the country to Syria and Iraq.

Aqsa Mahmood has been in Syria for more than a year

Aqsa Mahmood travelled from her home in Glasgow to Syria in November 2013 to marry an IS fighter.

In a statement her family also said the UK’s security services had “serious questions to answer”.

It said: “Aqsa’s social media has been monitored since she disappeared over a year ago, yet despite alleged contact between the girls and Aqsa, they failed to stop them from leaving the UK to Turkey, a staging post for Syria.

“Sadly, despite all the government’s rhetoric on Isis, if they can’t even take basic steps to stop children leaving to join Isis, what is the point of any new laws?”

The family also sent a message directly to Aqsa in which they said: “You are killing your family every day with your actions, they are begging you stop if you ever loved them.”