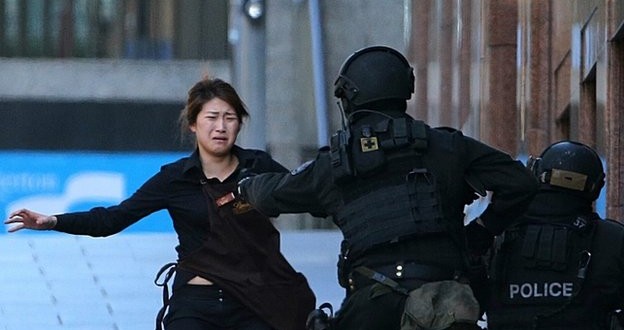 ‘No warning of attack’ on Sydney cafe

A hostage flees towards police during the Sydney cafe siege

Australia’s security hotline received 18 calls about a self-styled cleric just days before his deadly attack on a Sydney cafe – but none suggested an imminent attack, a report says.

The first official review into the attack at the Lindt cafe says the calls related to offensive Facebook posts by hostage-taker Man Haron Monis.

Two hostages were killed along with Monis during the December siege.

“Plainly, the system has let us down,” Prime Minister Tony Abbott said.

Mr Abbott, who will make a national security address on Monday, said he would consider changes to the legal and immigration systems in response to the siege.

He said Australia would have to reconsider where the line between individual freedoms and the safety of the community would have to be “redrawn”.

“This monster should not have been in our community,” he added.

Mr Abbott’s comments came as he released a 90-page report conducted by officials from the federal government and the government of New South Wales.

Monis was “the subject of many security investigations” before the attack, the report says

Australian Prime Minister Tony Abbott has proposed tighter immigration controls at the release of the first official report into last December’s deadly siege in Sydney. The gunman was a radical Islamic refugee from Iran who died when police stormed a cafe in the centre of the city.

How and why was an unstable man with radical views and a long criminal history able to bring terror to the heart of Australia’s biggest city? Monis was well known to the police and security agencies but was never considered to pose a serious threat.

The Iranian, who was granted asylum in Australia, became a citizen a decade ago. He had been charged with conspiring to murder his ex-wife along with dozens of sexual assaults, and was out on bail at the time of the attack on the Sydney cafe. In 2012, he was convicted of sending hate mail to the families of Australian soldiers killed in Afghanistan.

Tony Abbott said hard lessons had to be learned and the siege was likely to result in tougher visa, citizenship and bail controls.

Who were the victims?

How the siege unfolded

The document says that the 18 calls to the national security hotline were made between 9-12 December – three days before the cafe siege.

It says Australia’s security service and police considered that the Facebook posts by Monis “contained no indications of an imminent threat”.

“On the basis of the information available at the time, he fell well outside the threshold to be included in the 400 highest priority counter-terrorism investigations,” the review says.

It adds that Iranian-born Monis – who first came to Australia as a refugee in 1996 and was granted citizenship in 2004 – was “the subject of many law enforcement and security investigations” in the country before the attack.

He had a history of religiously motivated activism and called himself a cleric, but officials have said there is as yet no evidence his actions were linked to international Islamist militant networks.

He was on bail after being charged with dozens of sexual assault charges and with being an accessory to the murder of his ex-wife, who was stabbed to death and set alight.

Presenting the review, Mr Abbott said that “the decisions made were reasonable at the time, but plainly in their totality the system has let us down”.

Monis shot one of the hostages before being shot dead himself when armed officers stormed the cafe, ending the 16-hour standoff.

Another hostage, a mother of three young children, died after being struck by ricochets from police bullets.