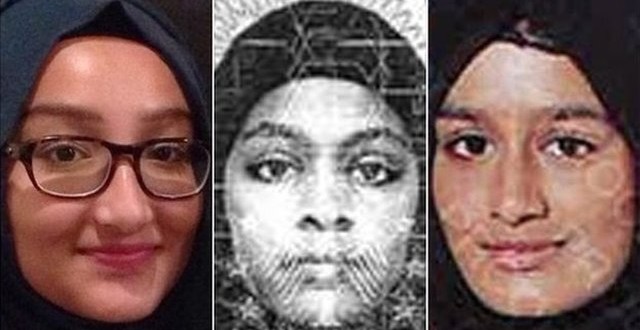 One of the schoolgirls sent a message to ‘jihadi bride’ Aqsa Mahmood on social media last Sunday, as Keith Doyle reports

The family of a Glasgow woman who may have encouraged three London girls to join Islamic State say officials “failed” to stop them leaving the UK.

Aqsa Mahmood, 20, who went to Syria to be a “jihadi bride” in 2013, reportedly had online contact with one of the girls who flew to Turkey last week.

It is feared that Kadiza Sultana, 16, and Shamima Begum and Amira Abase, 15, may try to join extremists in Syria.

Scotland Yard said it would not discuss matters of surveillance and security.

In a statement, Ms Mahmood’s family said it was “full of horror and anger” that she “may have had a role to play” in recruiting the girls for Islamic State (IS).

“However, the security services have serious questions to answer,” the family added.

“Aqsa’s social media has been monitored since she disappeared over a year ago, yet despite alleged contact between the girls and Aqsa, they failed to stop them from leaving the UK to Turkey, a staging post for Syria.”

Lawyer for ‘jihadi bride’ family: “You would expect the authorities to knock on the door and say your child might need help”

The statement said despite UK government “rhetoric” about IS, authorities had not taken “basic steps to stop children leaving” to join the militants.

Addressing Ms Mahmood, who moved from Glasgow to Syria to marry an IS fighter, the family added: “You are a disgrace to your family and the people of Scotland, your actions are a perverted and evil distortion of Islam.”

Their lawyer Aamer Anwar told BBC Breakfast that they wanted to know how the girls could have been allowed to travel to Turkey alone.

He added: “They are deeply distressed and angry. They are thinking: ‘How many other families is this happening to?'”

Aqsa Mahmood has been in Syria for more than a year

Kadiza, Shamima and Amira, who all attended Bethnal Green Academy in east London, flew from Gatwick to Turkey after telling their parents they were going out for the day.

Police said they had been interviewed after another girl from their school went to Syria in December, but nothing had indicated they were at risk.

BBC home affairs correspondent Daniel Sandford says Ms Mahmood uses a Twitter account to encourage British women to join her in Syria, and that last Sunday Shamima sent her a message via Twitter.

He said it was not clear whether the London girls – all “star GCSE pupils” – had yet crossed from Turkey into Syria.

The schoolgirls’ families have all made public pleas for them to return home.

Speaking on the Andrew Marr Show, Leader of the House of Commons and ex-Foreign Secretary William Hague said that “more has to be done by all of us” to stop vulnerable youngsters from being radicalised.

“From families, from mosques, religious leaders and of course the government we have all been very busy in communicating the dangers of travelling to Syria,” he said.

When ask by Andrew Marr whether he thought that parents should take away the passports of children they are worry might be being radicalised, he said: “It’s entirely open to parents to do that. Parents and families have a big responsibility.

“I think that the families who have spoken out have said that this is not what Islam is about and that it is a disgrace to their family.”

“There’s been a lot of criticism over the last year of the government doing too much surveillance and it’s been difficult to get agreement on powers to update the government’s powers to intercept communications. This can be an example of why it is necessary to be able to do that in some cases.”

Sara Khan from Inspire, an organisation which works to counter extremism and gender inequality, said 50 to 60 other young women are thought to have left the UK to join IS extremists.

“I don’t think we can underplay the religious aspect to it,” she told BBC Breakfast.

She added that many see it as a “religious obligation” – whereas in reality, they were “being exploited” and “groomed”.

Ms Khan said relatives, especially mothers, could help prevent others leaving in a similar way by “recognising early signs and differences” in their children’s behaviour and by challenging extremism.

He said while it was likely there would be an inquiry into what more could have been done, the focus should be on “radicalisation and the motivations of these young girls”.