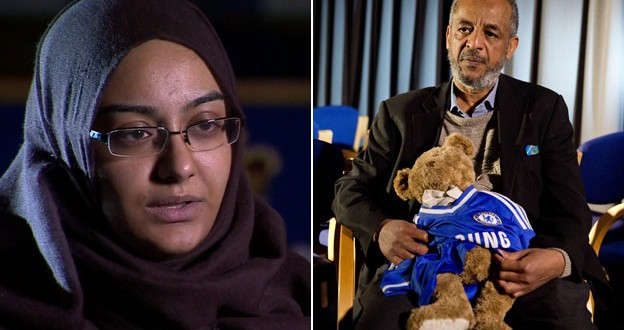 Relatives of two missing London girls say there were no signs they were planning to go to Syria, in emotional interviews appealing for their return.

Amira Abase, Shamima Begum, both 15, and Kadiza Sultana, 16, travelled to Turkey on Tuesday and it is feared they plan to join Islamic State in Syria.

Shamima’s sister Renu Begum urged her to come home and not to “do anything stupid”, adding she is “our baby”.

Kadiza, Shamima and Amira, who all attended Bethnal Green Academy in east London, flew from Gatwick to Turkey after telling their parents they were going out for the day.

It is not clear whether the London girls – all “star GCSE pupils” – have crossed from Turkey into Syria.

Abase Hussen said his daughter had said goodbye to him in a normal way: “There was no sign to suspect her at all”

Police said the girls had previously been interviewed after another girl from their school went to Syria in December, but nothing had indicated they were at risk.

Mr Hussein said Amira had not spoken about Syria or politics with her family and said: “There was no sign to suspect her at all.”

In a direct appeal to his daughter, he said: “Remember how we love you. Your sister and brother cannot stop crying.”

The girls left their homes before 08:00 GMT on Tuesday, providing their families with “plausible” reasons as to why they would be out for the day, police have said.

However, they boarded a Turkish Airlines flight, which departed at 12:40 GMT to Istanbul.

Ms Begum, 27, said there was no indication her younger sister had been thinking of leaving for Syria and said her disappearance had left “a big hole” in the family house.

“We don’t want her to do anything stupid – she is a sensible girl,” she said, adding: “We just want her home, we want her safe.”

She said Shamima had been “upset” after a friend left for Syria and said the family was hoping the girls had “gone to go and bring her back”.

“She said, ‘Dad the place is a little bit far. I pray my midday prayer and I get back.’ She didn’t come home,” Mr Hussen said.

The family reported Amira as missing that night.

“We are depressed, and it’s very stressful,” he said.

“The message we have for Amira is to get back home. We miss you. We cannot stop crying. Please think twice. Don’t go to Syria.”

He said his daughter had never spoken about an interest in the militant group with him.

“She doesn’t dare discuss something like this with us. She knows what the answer would be,” he said.

It comes as the family of a Glasgow woman who may have encouraged the three girls to join IS said officials had “failed” to stop them leaving the UK.

Aqsa Mahmood, 20, who went to Syria to be a “jihadi bride” in 2013, reportedly had online contact with one of the girls.

In a statement, Ms Mahmood’s family said she was a “disgrace” to the family they were “full of horror and anger” that she may have had “a role to play” in recruiting the girls.

“However, the security services have serious questions to answer,” the family added.

Scotland Yard said it would not discuss matters of surveillance and security.